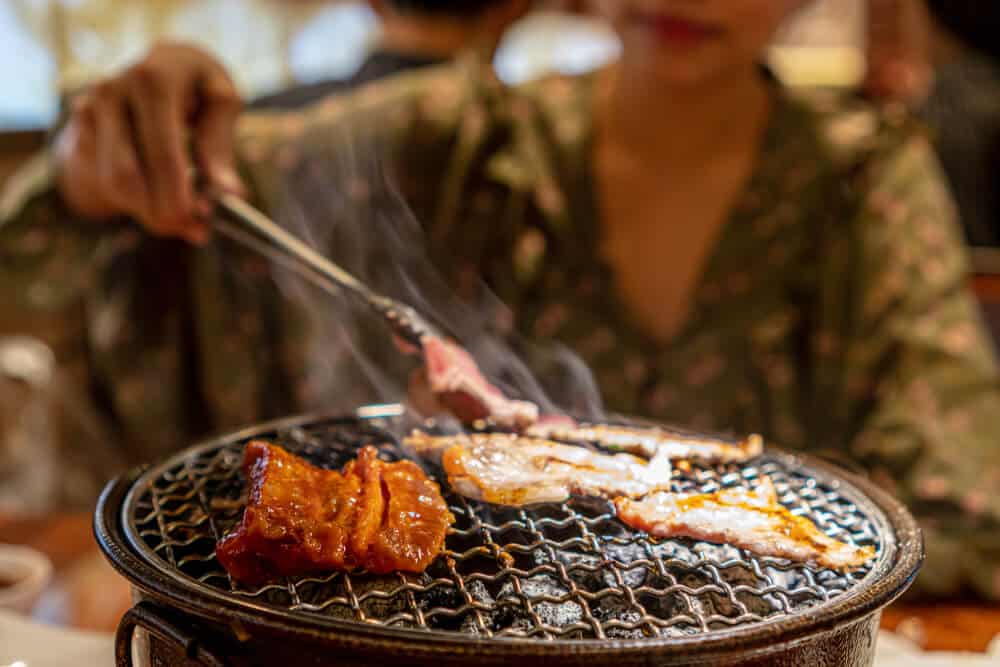 Have you ever been so hungry that you could eat a cow? Well, yakiniku has the answer! It’s all the glory of a backyard BBQ with none of the inconveniences like shopping, preparing the meat, cleaning up, or mosquitoes! Yakiniku is both simple and delicious: just order your choice of meat and sear it to your liking on the grill at your table. 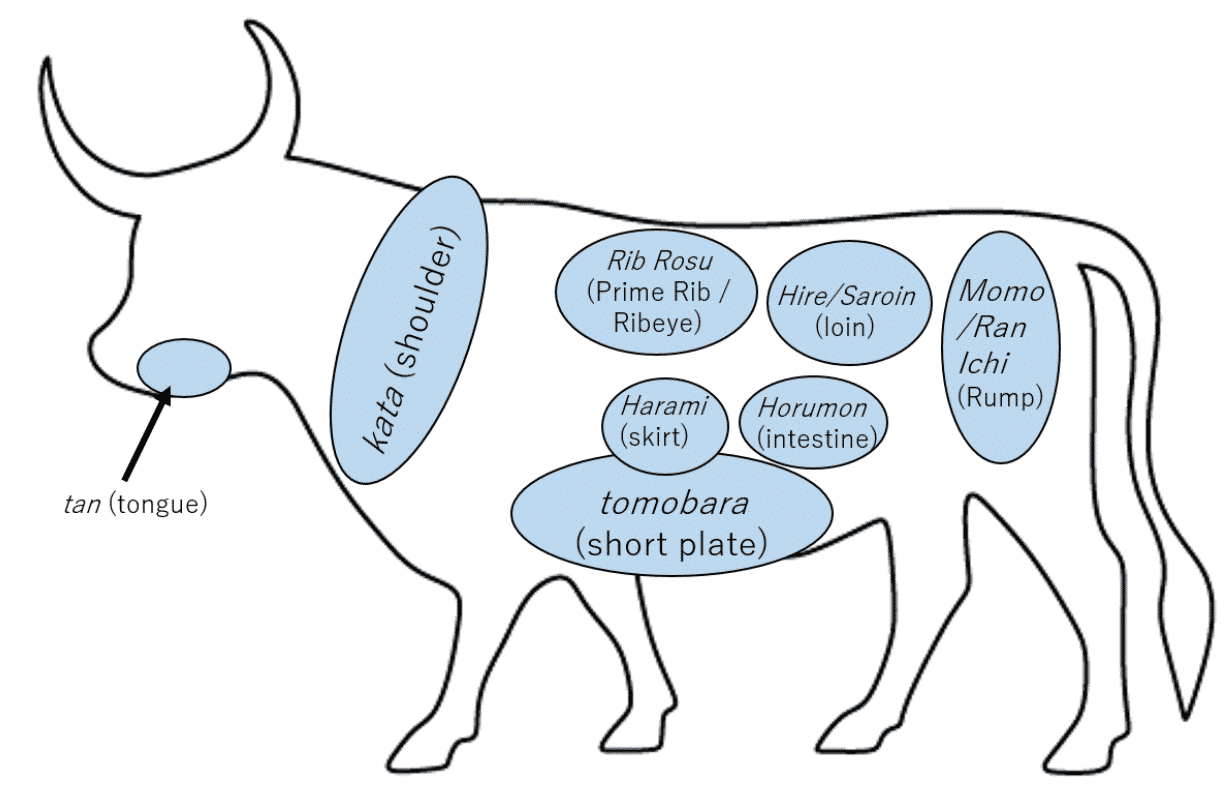 However a potential obstacle is a lack of translation on the menu beyond writing the cut of meat phonetically in English (e.g. ササバラ becomes “sasabara”). And even if sasabara was translated to “flank,” how many people know the difference between a cut of flank steak, chuck, or sirloin? Fear not, below is a guide to some basic cuts of meat available at most yakiniku joints. Depending on the restaurant, some of the cuts may be further divided into more specialized, flavorful (and expensive) slices, but this will get you started.

Remember sasabara? This is where that comes from! Sasabara, or flank steak, is a cut of ribs near the hind legs. Sasabara is best cooked on high heat, preserving the juices. Dipped in soy sauce, it will satisfy even the most pristine palate.

By far, the most popular cut from the tomobara is karubi, or boneless short rib. If they have it, most yakiniku menus will flaunt their karubi as it is one of the most delicious and juicy cuts around! Karubi is a catch-all name for several different cuts from the lower ribs that differ in quality, marbling (fat content), and flavor. Nevertheless, if you see “KARUBI!” on the menu, rest assured that it will be delicious. 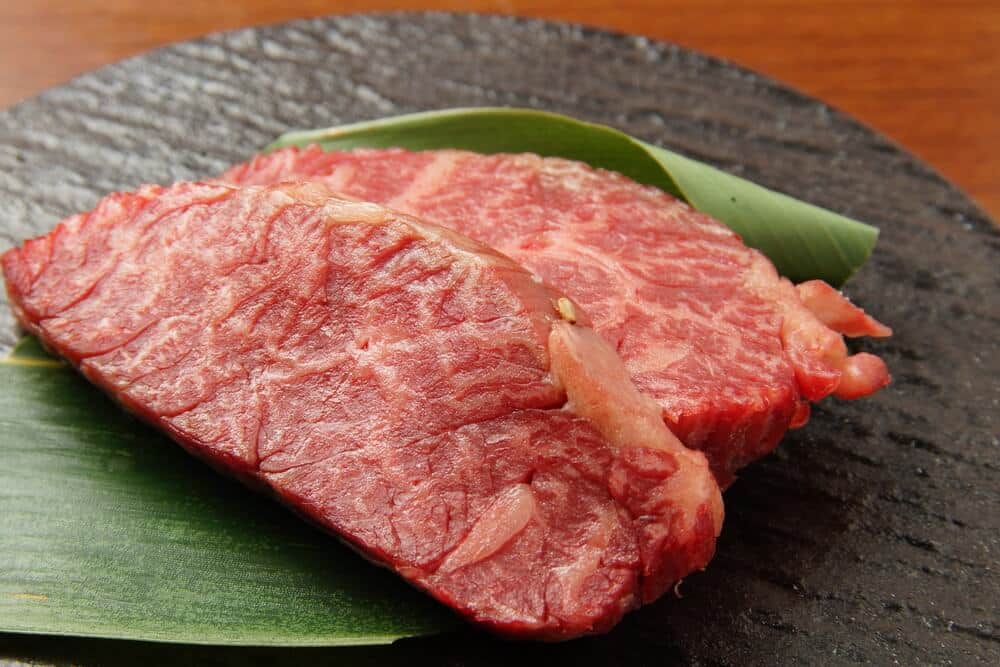 Harami is sometimes grouped with tomobara meats. It is separate here because it is not technically meat (正肉), but is actually innards (内臓). To many Westerners, this may be off-putting, but innards are an essential and delicious part of yakiniku and Japanese cooking in general (anyone hungry for some motsunabe!?). Harami is technically called “skirt” in English, but for those of us who lack a PhD in Cow, it is a section of the abdominal muscle near the diaphragm. It is packed with flavor and is best eaten after quickly searing the outside on high heat. Harami is also somewhat rare, so if it’s on the menu, be sure to give it a go! 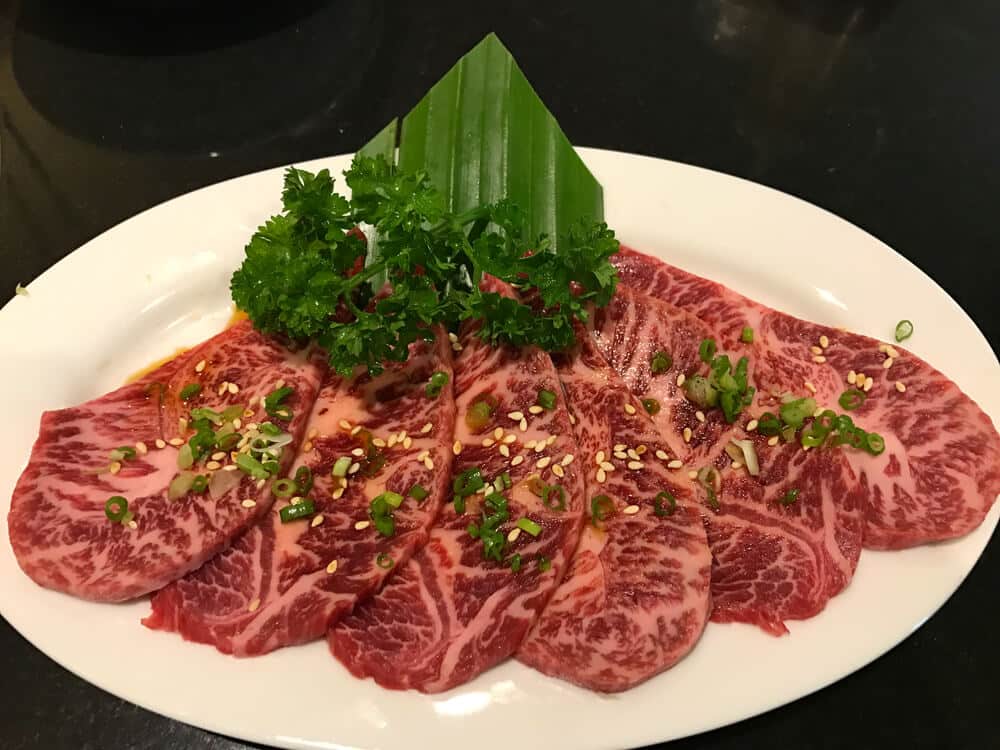 Fans of American, Southern-style BBQ already know that this area makes for good eatin’ when the meat is cut and cooked right. In Japan, kata generally refers to both brisket (just above the front legs) and chuck (the upper shoulders behind the neck). Some of the most popular cuts are kata rosu (shoulder/chuck loin), mitsuji (meat from the inner shoulder blades), and tonbi or togarashi (tender chuck). Most of these are lean meat that will be comparatively tough, meaning you should let it cook slow. Togarashi (so called because it looks like a togarashi pepper) is the exception. 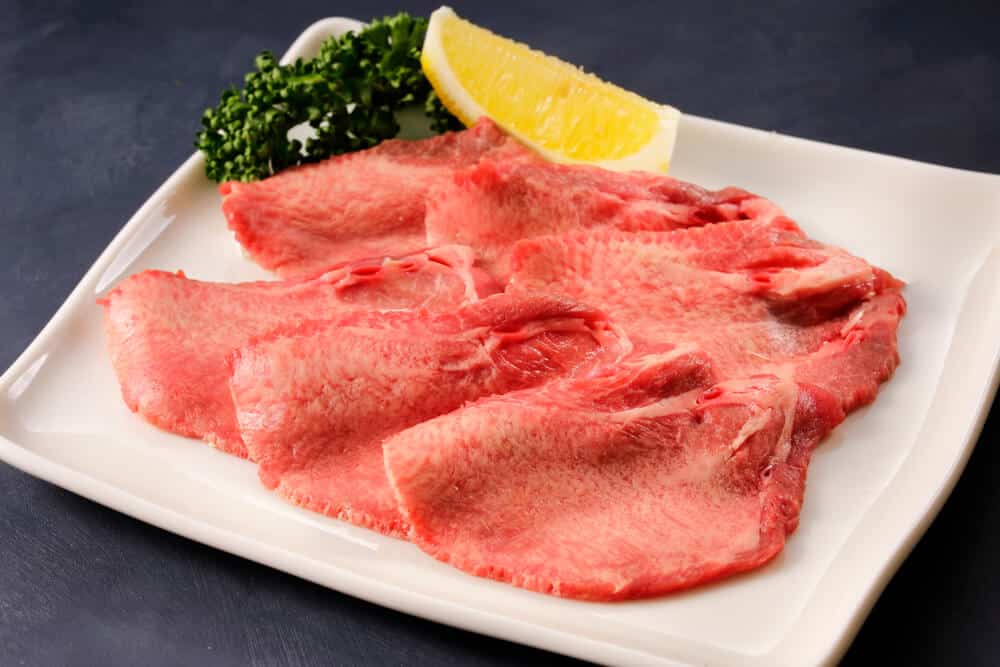 More so than harami or horumon (more on this later), I was hesitant to try tan (tongue) for the first time–I’ll leave that to Freud to figure out. But I’m glad I dared to take the first bite! Since then, beef and pork tongue have become some of my favorites. It is especially delicious when dipped in ponzu, a sauce made from Japanese citrus and vinegar.

Just behind the shoulders of the cow are some of the juiciest and most flavorful meats available. The most well known cuts are ribu rosu (prime rib) and ribu rosu shin (ribeye). “Rosu” can roughly translate to “loin” and is a dorsal cut of meat running away from the shoulders. These will not come in the form of massive steaks that many visitors may be accustomed too, but they will be just as delicious! Of all the yakiniku meats, ribu rosu and the next section, saroin, should be the easiest to remember (ribs and sirloin). 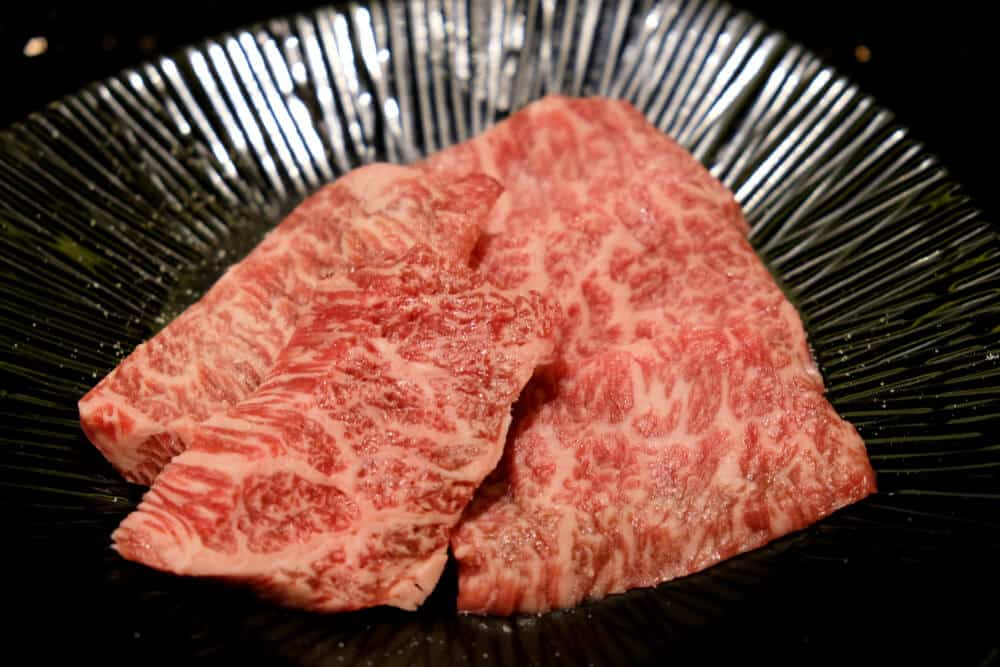 Hire and Saroin: Tenderloin and Sirloin

Hire (tenderloin) and sirloin are some of the most tender cuts of meat. This area rarely gets exercised, which means that there is minimal muscle and the meat is tender. As such, most cooks prefer to leave these meats as rare as possible. At yakiniku restaurants, sirloin and especially hire are some of the thickest slices you can get. Even though they are usually some of the more expensive cuts on the menu, they are well worth it!

The back of the cow has almost too many styles of beef to count. The rump (ran ichi) and round (momo) are generally considered to be the most flavorful areas. Rump meat in particular is very tender and versatile in the styles of cooking that it can be used for. The shintama cut from the momo is very popular because of its low fat-content and flavor. 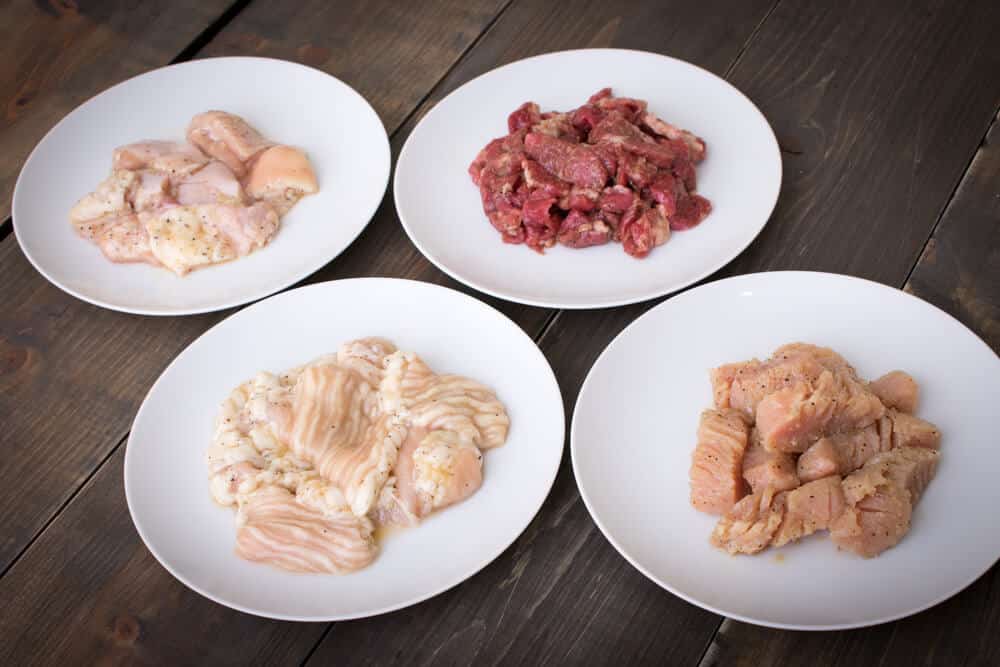 Last, but certainly not least, is horumon, a catch-all for innards (but usually intestines). I hope I didn’t just lose you, because this is guaranteed to be one of the most delicious items on the menu! Of everyone I have talked to who does not like horumon, no one lays the blame on flavor; instead, the texture (which can be admittedly… chewy) is the usual culprit. Some of the more popular horumon are liver (crumbly/chalky texture), small and large intestine (oh so chewy), and heart (very dense). Tan and sasabara are also technically horumon, but their texture is much closer to conventional beef. 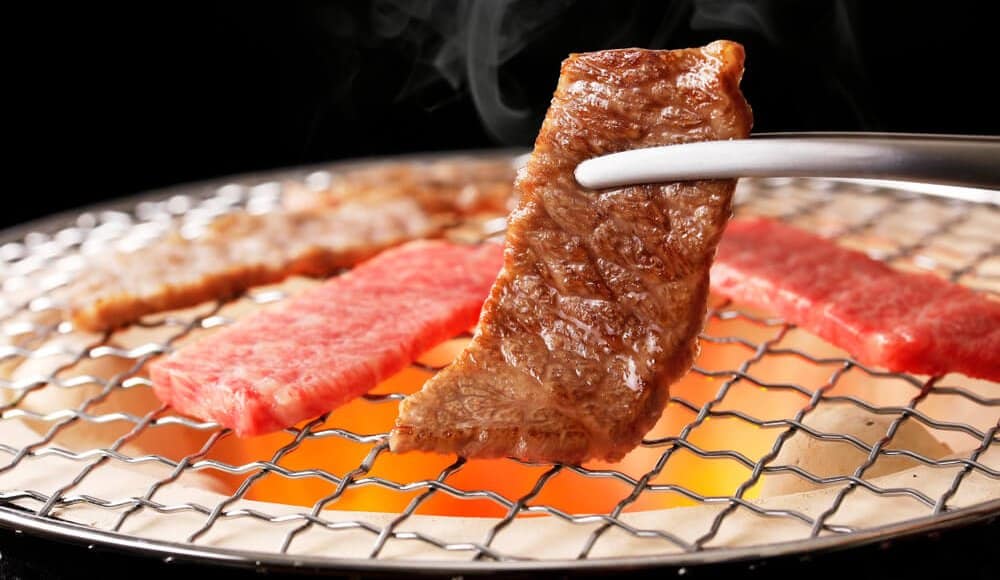 Hopefully this article has given you the confidence to try yakiniku. The only thing left is to make sure you’re hungry! All-you-can-eat is one of the most popular ways to do yakiniku. So if you’re in Tokyo, maybe go after climbing the steps of Tokyo Tower or hiking Mt. Fuji. For Kyoto visitors, a quick jog up Fushimi Inari or Mt. Hiei should put you in the mood! For any celebrations, be sure to add the all-you-can-drink option!

Learn more about Japanese beef and other top must-try foods from your home, before you travel to Japan. We have a great online experience sharing local tips and food history. Great way to prep for a future trip! 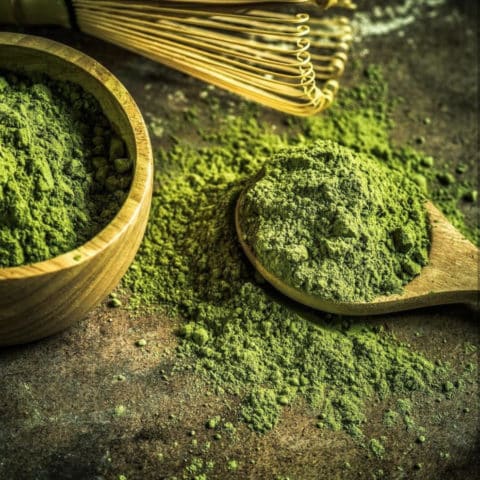