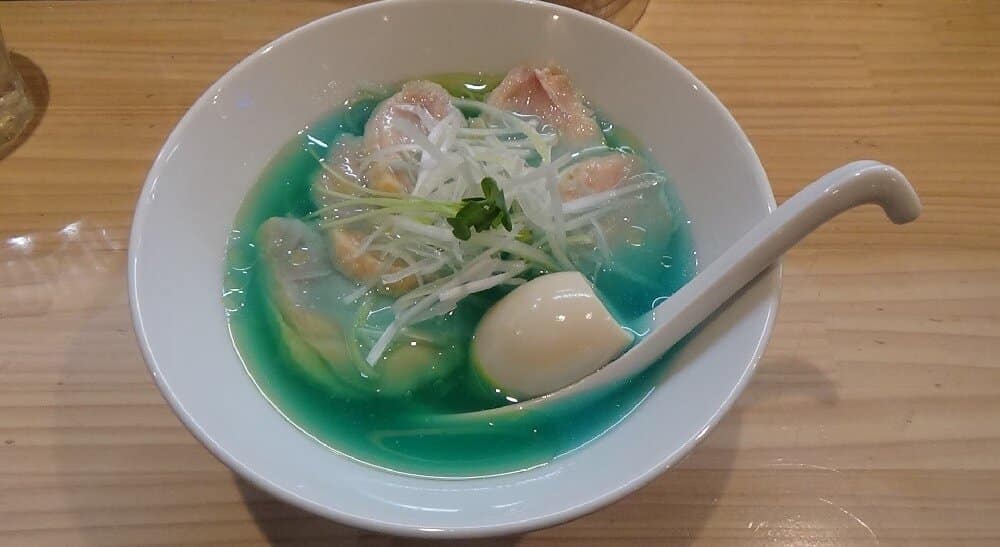 Finding the end of the rainbow, in this case a Rainbow Ramen shop, can be tricky as we found out… Tucked down a small corridor in a nondescript building a few minutes walk from Shibuya station is a small, nondescript, but modern looking ramen restaurant. You can miss it if you walk too fast (which I did) and end up in a hallway that looks a bit sketchy and like there can’t possibly be anything worthwhile there. I doubled back, after wondering if I needed to go downstairs. Finally, I saw a small grey sign reading ‘Kipposhi’. I had arrived at the home of the famous ‘coloured ramen.’

The restaurant is modest, and seems a bit more western than most other ramen restaurants I have visited in Tokyo. The clientele was a mix of Japanese locals and tourists, though the staff (our server at least) didn’t seem to speak English. Luckily their menu has a mix of English and Japanese, accompanied with pictures of the dishes, so ordering shouldn’t be an issue. We went around peak dinner time, but it didn’t seem to be overly busy. There are rustic wooden tables, or a seat at the counter option. They also have a very well stocked bar from which you can order cocktails. 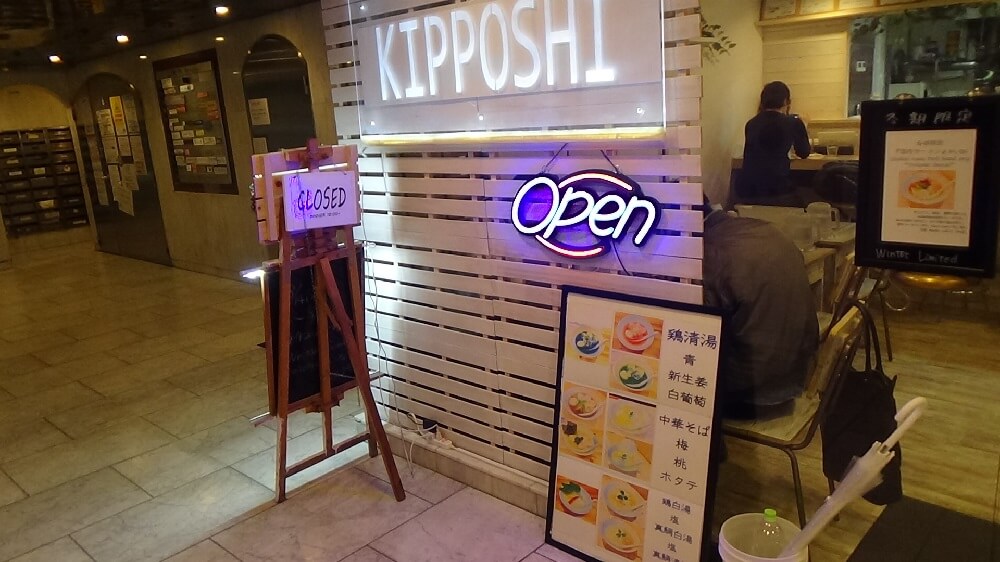 I sat down with my friend at the wooden tables and opened up the menu. Opening to the section which stated ‘Clear Chicken Soup’, they offer four different options of fanciful coloured ramen. That being said, I want to say that I only tried three of the most brightly coloured soups during my visit. The reason for this is that the fourth, brown soup is ‘Soy Sauce’ flavour. Sadly, being only two humans, we only had room for a limited amount of noodles and we wanted to make sure we could review the most interesting of the meals for our Arigato Japan readers!

The first we tried was the ‘Pink Ginger’. With a broth that was the exact colour of the ginger for which it was flavoured, I would say this was the strongest flavoured of the three soups we tried. Now I will preface this by saying that I don’t like ginger, but I tried it for the sake of this article. My friend loved the soup and said it was actually his favorite because it had a sharper flavour than the others. I actually didn’t mind this broth, despite my flavour preferences, though if ginger isn’t your thing I might suggest trying a friend’s rather than committing to an entire bowl. 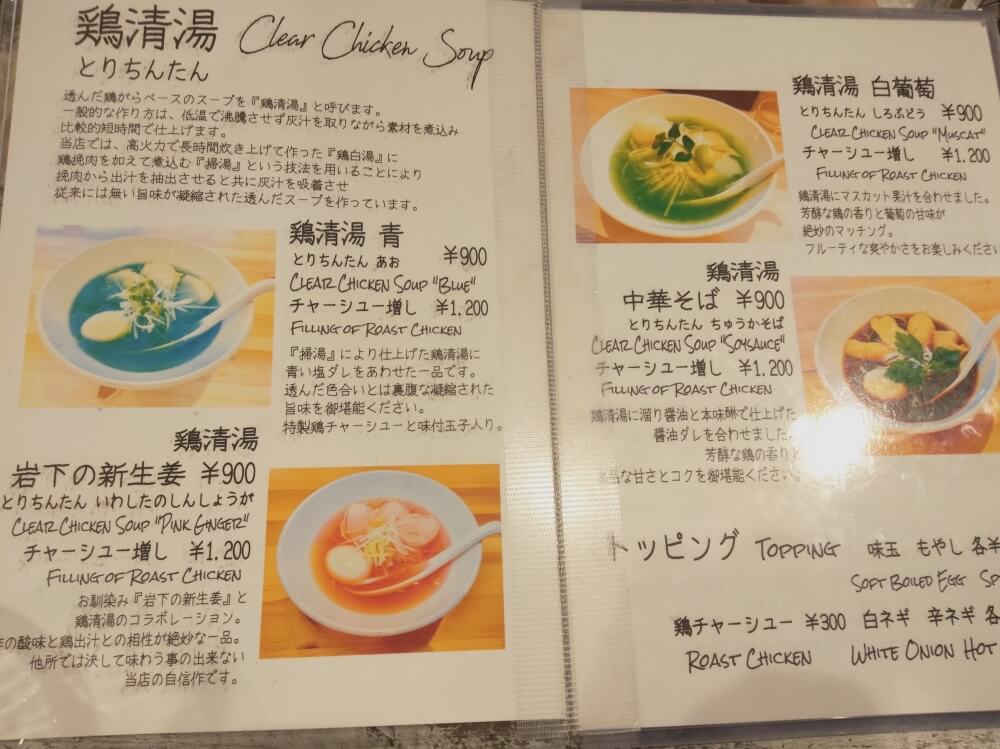 Next up was the ‘Muscat’ broth. For those who don’t know, muscat is a large grape which is often grown in warm climates (like most of Japan) and is frequently cultivated for wines. Though muscats can be white, red or purple, this broth was a deep green hue. It had a sweeter flavour and aroma than the others, and you could certainly pick up the fruity notes in the broth. I would say this was the most uniquely flavoured of the three, and though it was just as caloric as the other options, it seemed to have the lightest flavour. 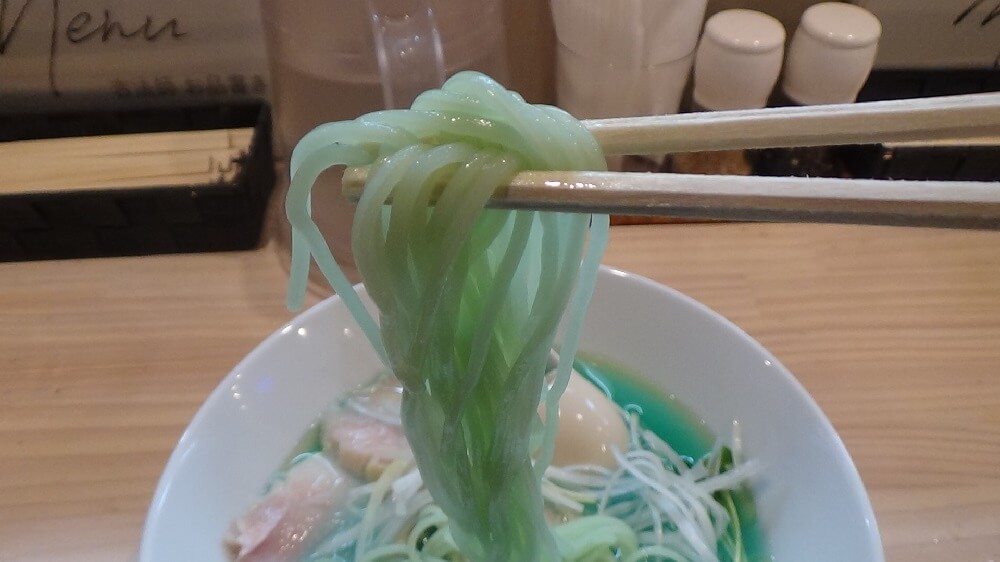 The third and final tasting was the ‘Blue’ option. This one, to me, was the coolest of the colourings (as blue is my favorite colour) but… it was the most boring! This one doesn’t actually have a unique flavour to it. It’s simply chicken and salt flavoured. I can’t deny that the most unique colour was the most hum-drum of flavours.

That being said, I also can’t deny the instagramability of the dish. Still I think it would be nice if it was… I don’t know… blueberry flavoured? (There really aren’t many blue flavoured foods, and heaven forbid they have a ramune flavoured broth!) Essentially, I would suggest this option if you have simpler tastes, but still want to take part in the picturesque ramen experience (or perhaps if you have children). 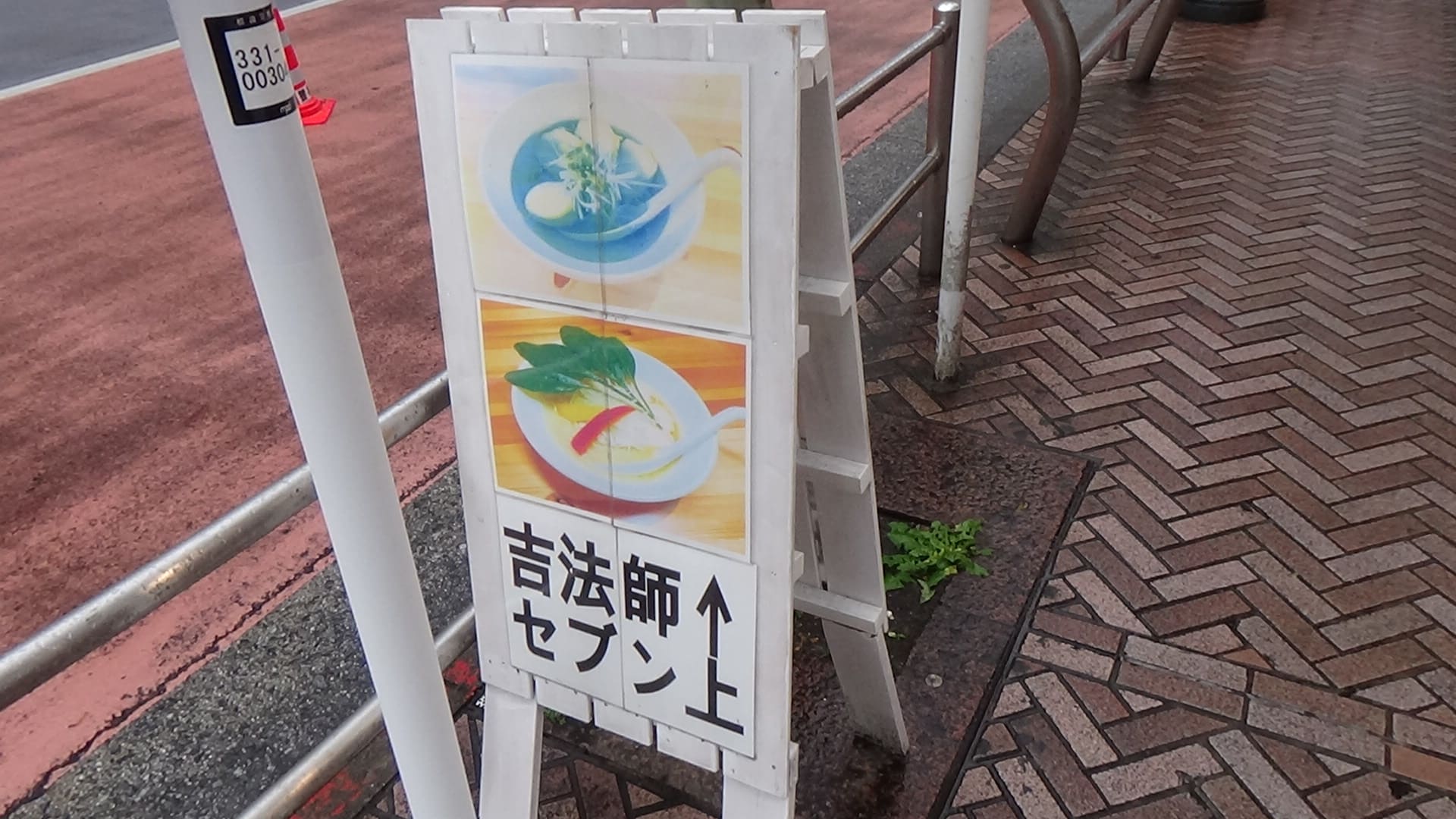 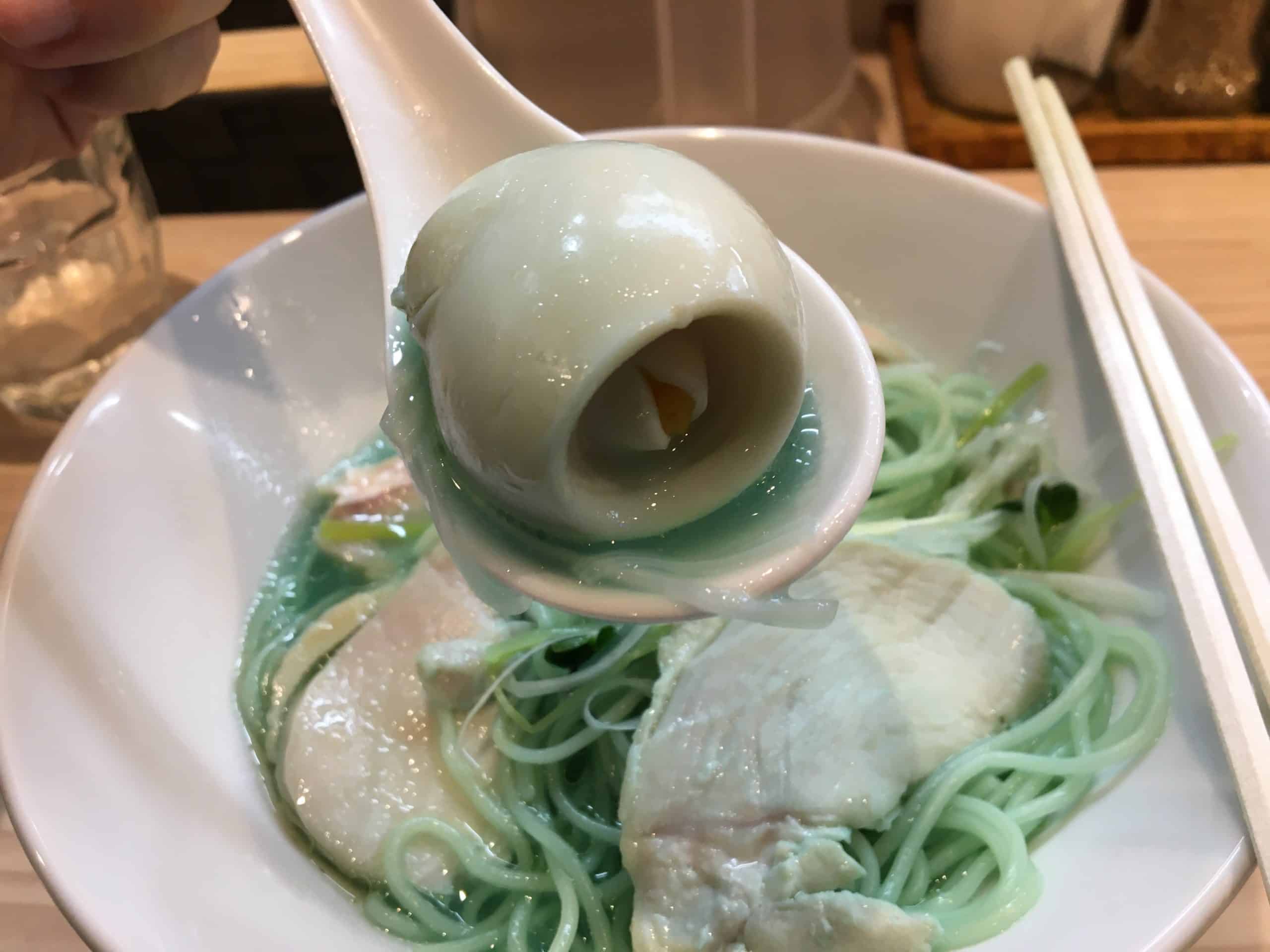 If you want to try something fun and colourful, and happen to be in the Shibuya area, I highly recommend giving this a try. This is not your typical ramen, and I think the novelty of this restaurant is worth a visit. Plus they have decent prices and it’ll add a splash of colour to any Instagram feed!

PRO TIP:  head on down to Kipposhi and bring friends so you can try a little of each colour! 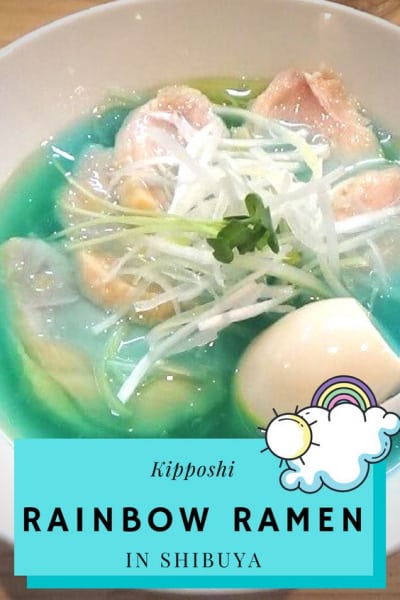 If you want to learn more about ramen culture and taste 6 different flavors in one tour, be sure to join our ULTIMATE ramen tour!

Book your pocket wifi now, to stay connected through your entire Japan Journey! 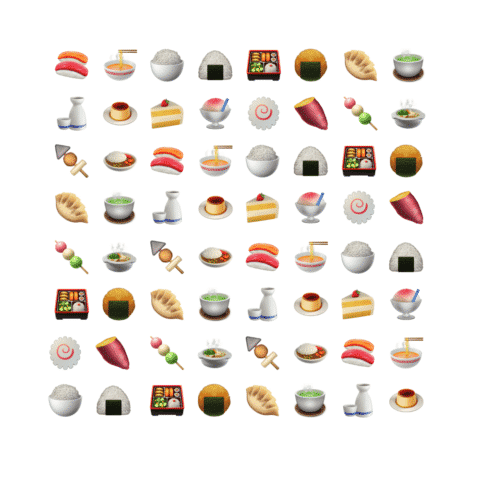 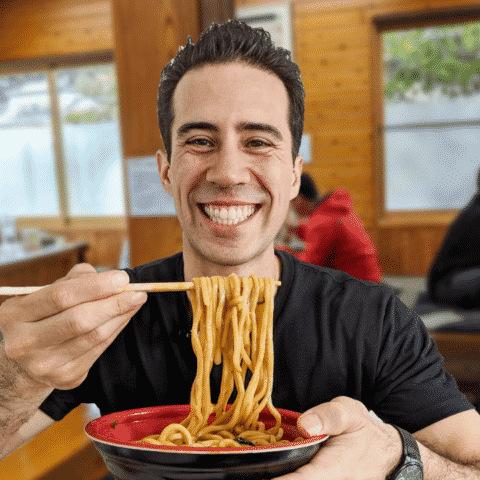 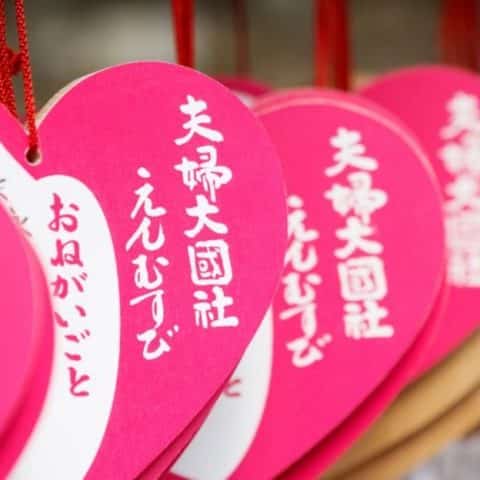