Sugamo, The Local Food and Culture Adventure For Everyone 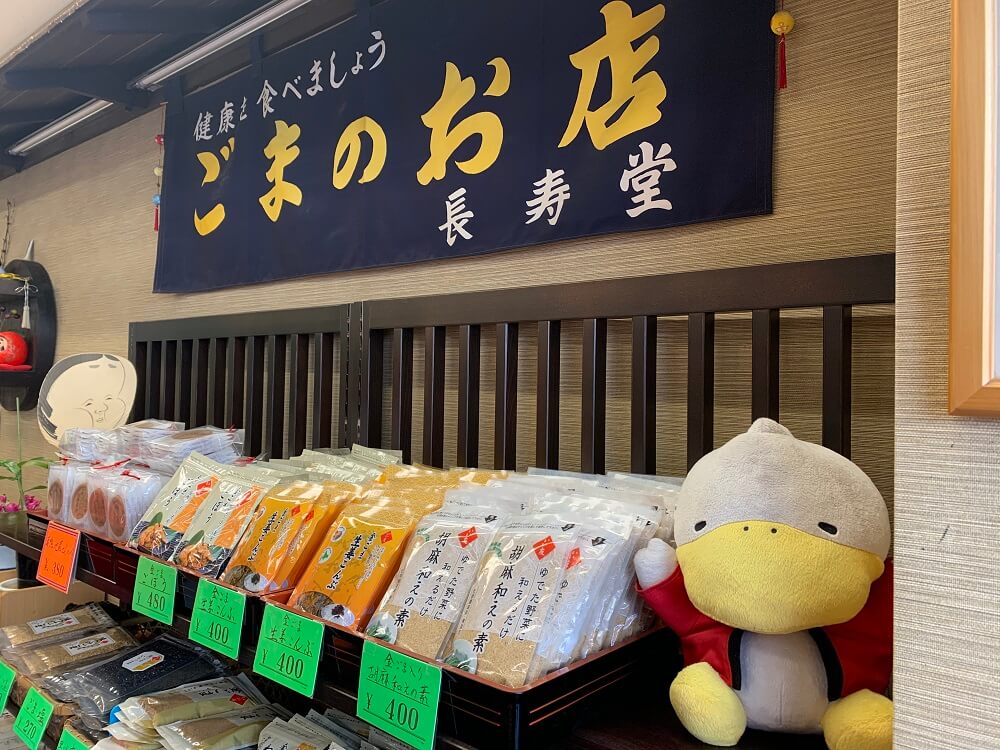 Sugamo has been a jewel of history throughout its more than 100 years of existence, gracefully preserving its local atmosphere. The name Sugamo (巣鴨) literally means “duck nest” (巣/Su = nesting, 鴨/gamo = duck) and the mascot of the area is Sugamon, a cute duck whom you can find around all the neighborhood. Sometimes you’ll even see a display with his butt poking out! Signs will say that if you poke it once, you’ll get married; poke it twice and you will live a long life.

Sugamo Station first opened in 1903, and it was in nearby Somei Village where the first Someiyoshino cherry blossom or sakura tree was created. In the 19th century, this breed of tree was designated as the tree to signify the coming of Hanami (花見 blossom-viewing) season when cherry blossoms would bloom. Nowadays, 70% of cherry blossom trees in Japan are of this breed. Every spring, you can enjoy Hanami at Somei Cemetery, or by following the train rails lined by Someiyoshino trees between Sugamo and Otsuka Stations. 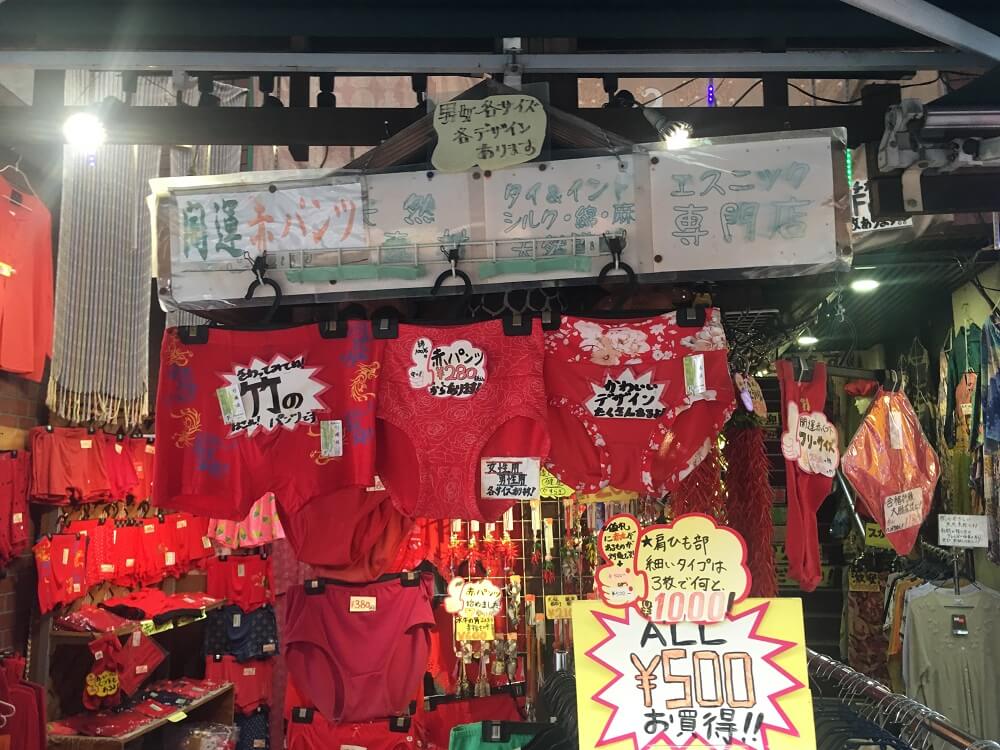 Also known as “the older generation’s Harajuku,” Sugamo is packed with specialized shops with products for elders, such as walking sticks, shopping trolleys and other mobility aids. But more than anything else, you’ll find lots of shops for red underwear: panties, underpants, boxers, socks, stockings, etc. Legend has it that red underwear is supposed to stimulate the life energy or Ki (気) of those who wear it, increasing their stamina. Since the color red is also associated with blood, red underwear is supposed to help blood circulation by boosting the adrenaline of its wearer. That is why people are warned to not wear red underwear while sleeping since it can cause excitement, and thus problems falling asleep. Finally, in Japanese belief, the color red is also used to expel demons and misfortune.

My experience taking Arigato Japan’s Food, Culture and Calligraphy Tour in Sugamo felt like a breath of fresh air. After living in Tokyo for almost five years, it is always fun to get to know places that still have that local feeling. My job is like an endless path of learning about Japan and becoming an amazed tourist time and time again, in spite of the time I’ve spent living here. That makes this neighborhood an oasis of calming energy for me. 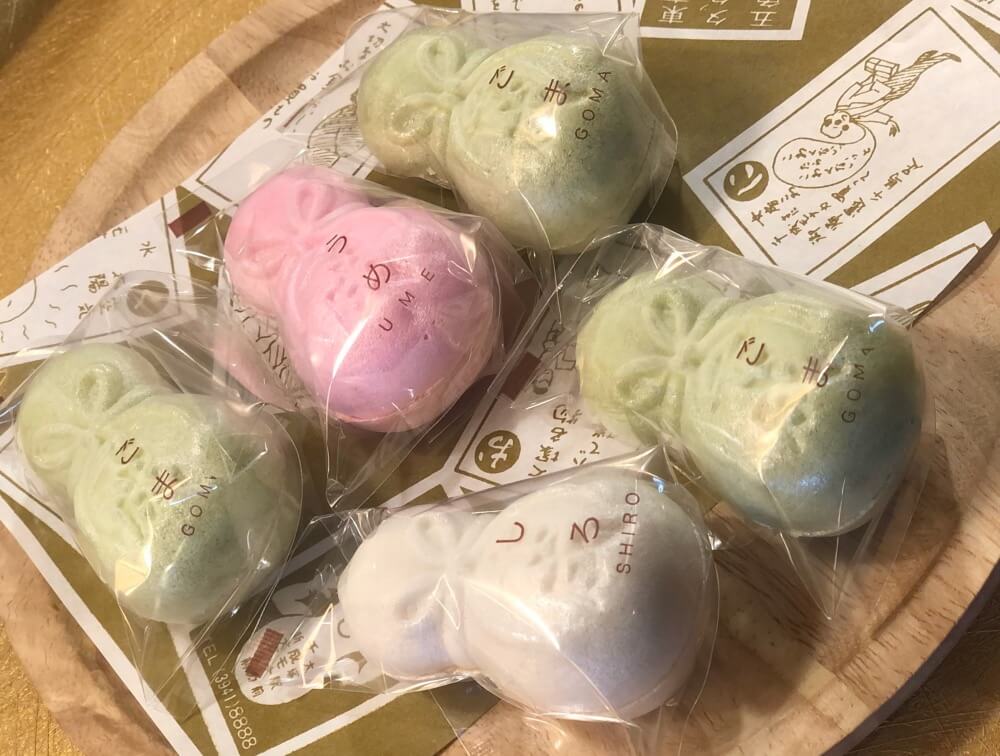 The monaka shop also offers one of the most delicious sweets I’ve ever tasted called dorayaki (どら焼き) which is a sandwich made from two fluffy pancakes filled with red bean paste and a generous slice of the delicious Calpis butter from Hokkaido, the region known for having the best dairy products in Japan. The saltiness from the butter and the sweetness from the bean paste and pancakes explode in your mouth. And as weird as it may sound, if you add a sprinkle of black pepper, it will end up being better than perfect. I could come back to Sugamo just to eat this piece of heaven. Being from Mexico, it may seem strange for me to say that I like my beans savory now. In fact, the first time I tried azuki bean paste, I was disgusted. But little by little, and especially after having dorayaki in Sugamo, my thoughts and palate changed completely. 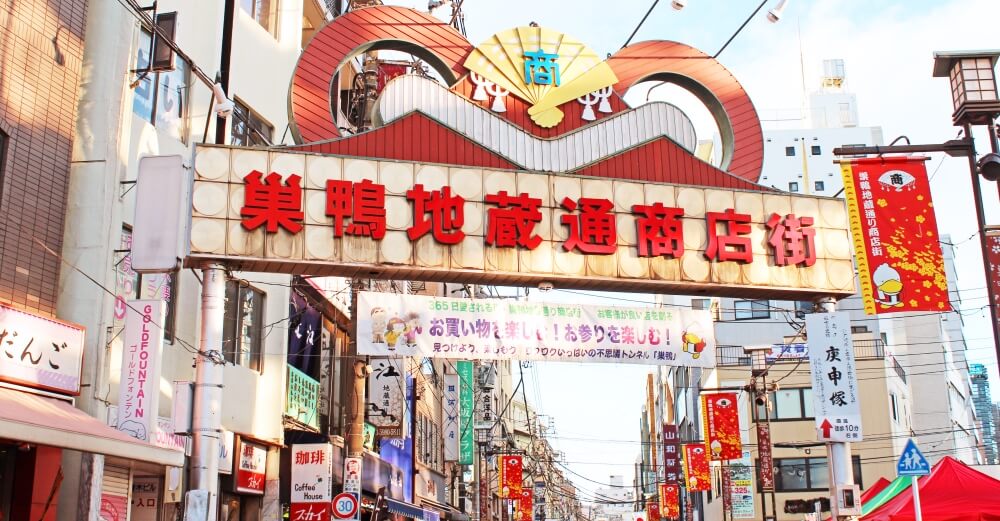 We then walked the main shopping street in Sugamo called Jizo-Dori. Dori (通り) means “street” in Japanese, and Jizo (地蔵) is the Japanese name for a Bosatsu (Bodhisattva), which is defined as:

“…a person who has attained prajna, or enlightenment, but postpones Buddhahood (Nirvana) to help others to attain enlightenment and transcend the “wheel of life”. There are many Jizo deities, each with a different name; these are modern adaptations unique to Japan rather than Buddhist traditions from mainland Asia. Although of Indian origin, Kshitigarbha (Jizo) is revered more widely in Japan, Korea, and China than in either India or Tibet.” (Quoted from Inside Japan)

Togenuki Jizo is one of the deities worshiped at Koganji Temple, along with the Bodhisattva Kannon. The word “Togenuki” (刺抜き) literally means “to pull out a thorn,” and it is believed that an illness can be extracted from the body by placing a charm with an image of the Jizo over the injured part of the body and praying over it. Visitors to the temple can buy edible papers with his image. After placing the paper over an ill or injured part of your body, you can then put it in your mouth and let it dissolve so that you will get healing and protection from Togenuki Jizo. 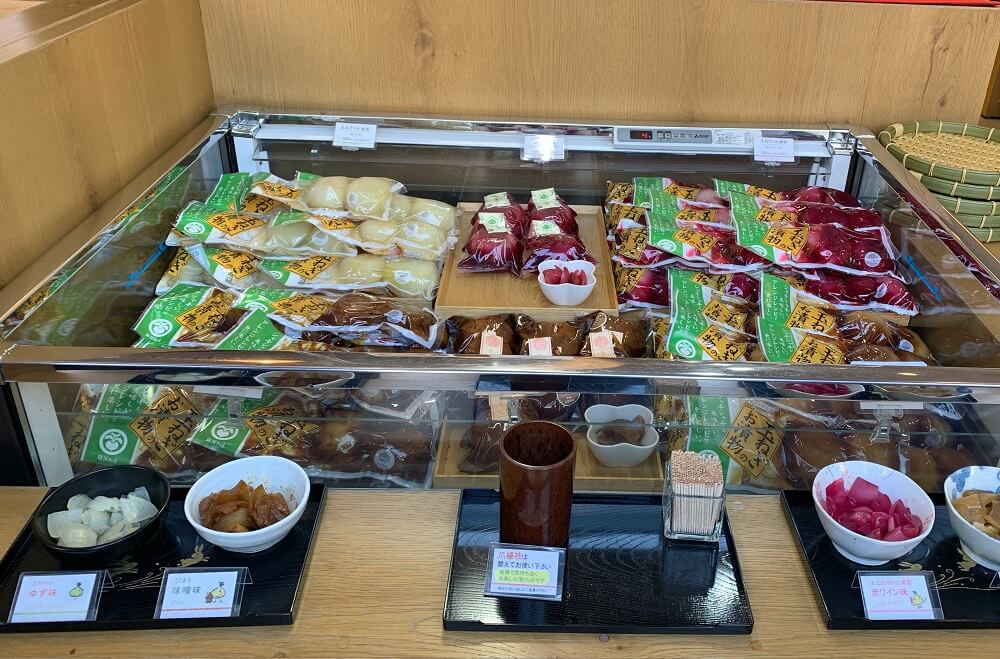 We walked along Jizo-Dori, an 800-meter long street lined by small shops, most of them owned by the same families for many generations. This is also where we started seeing the red underwear shops.

Our first stop was a pickle shop where we sampled some of their offerings, including their specialty pickled onions preserved in vinegar, salt and even red wine. In Japan, pickled food is one of the most important side dishes in a meal. In Sugamo, you can find pickled food shops everywhere since they are good for the body.

After that, we visited a senbei (煎餅) shop. Senbei is a cracker made from rice flour. One version simmered in soy sauce with varying degrees of thickness, from very lightly flavored and lightly colored ones, to a super deep, savory and dark colored ones. It is the perfect companion for a glass of beer, and this shop has been in business for about 40 years now. Right next to it is a tofu specialty shop that has tofu used in any way that you could ever imagine: deep-fried, a version that is a substitute for cheese, mixed with pickles, you name it, they will have it.

Next was one of the most popular shops in the area, selling a special kind of slightly salted daifuku (大福) since 1937 with their unique daifuku is one of their most popular products and has become a symbol for the neighborhood. This dessert is a mochi cake filled with red bean paste, and we could see people lining up outside the shop to get some of their products to take home and share with family and friends.

Along Jizo-dori, you can taste samples from the many shops selling tea, sake, dashi stock, bread, pastries and more. Even with just samples, going on this tour could make you feel a little bit full by the time you make it to lunch, but it is amazing that the shop owners are always happy and proud to talk with you about their products.

For lunch, we stopped at an old-style soba (蕎麦) noodle shop. I’m a person who loves all kinds of noodle dishes and this place was amazing. You can choose from a couple of different options including three varying set meals that are super delicious and very filling, especially after all the snacking from the previous stops. The shop workers make the noodles by hand, giving them an extra flavor of authenticity.

After filling our bellies, we then visited Koganji Temple. During the Edo Period, this temple was part of Nakasendo Highway, connecting Kyoto and Tokyo when the former was still the capital of Japan. It was built in 1596 and became well known thanks to the story of a very ill wife of a famous samurai who got healed after praying to the powerful Togenuki Jizo. Here, you will also find a statue of the Goddess Kannon, and hundreds of people come here every week to wash and wipe the goddess’s statue while praying. The belief is that if you do this, you will be healed in the parts of the body that you cared for on the statue.

Right in front of the temple, you can find all kinds of charms and handmade crafts that will complete the protection pack against evil and sickness. Also, on the 4th, 14th and 24th of every month, Jizo-Dori is closed off to traffic and you can find food stalls all along the street. The temple celebrates its biggest Matsuri (祭り festival) on January 24th, but this is such a popular place of pilgrimage that having a festival 3 times a month is no problem.

Our last stop (which thankfully wasn’t a food stop since I was utterly stuffed) was a small but beautiful studio. I know, since Sugamo is the playground for the elderly, you might be guessing that this place is owned by old people. However, it is actually the result of a very admirable effort by young people who are trying to preserve the ancient practice of Shodo (書道), the art of writing kanji characters in a skillful, harmonic and beautiful way.

When I was back in my home country, I was fortunate enough to have been taught Shodo by a very nice Japanese lady. Even though she couldn’t speak English or Spanish, and I couldn’t speak Japanese at that time, with patience, she showed me the beauty of this art. Every single stroke, dot and movement has an order, intention, and feeling to it. From the way you put the ink in the container to how you hold the brush and your posture, everything matters, even your breathing and thinking. At that moment, you have to feel the character you are writing because your body will move accordingly to your intention when you follow the order of the strokes. This is a way of art that builds your patience, concentration and, even if it sounds a little farfetched, helps your posture.

On this occasion, we were taught by Emi Kato, a very skillful young woman who has been doing Shodo for almost two decades. After a brief introduction of the teacher and each person in the room, we watched a video clearly explaining the basic strokes and rules. We then proceeded to learn how to write the character for eternity (永) which contains all the basic strokes for Shodo following a demonstration by Emi-sensei. As we practiced this a few times, the teacher and the staff were walking around us to show us what we could do to perfect our skills.

We were asked to choose one kanji character from the study materials that they presented to us, which was tough given the amount of options. Another option is to let the teacher help you choose the kanji characters to write your name. Whatever kanji you choose, the idea is to write and then print it over a t-shirt that you can proudly wear later on. I chose the word 我武者羅 (ga-mu-sha-ra) which literally means “reckless” or “daredevil,” which could be a bit strong-sounding of a word. However, the feeling that Japanese people get from hearing this word is more like that of a person who fights for their dreams. After writing our chosen kanji character a few times, the teacher helped us choose the best one, and minutes later we had our own calligraphy t-shirt in our hands.

This tour is an amazing experience to get out of the hustle and bustle of mainstream Tokyo, and immerse yourself in a more cozy area where you can lose yourself for hours by trying all the different snacks, talking with the happy and proud locals about their businesses, or simply walking around and taking in the calm atmosphere of this place. There is no rush in Sugamo, and to a Tokyoite, that is a true blessing. It is not just a look into the past, but also a reminder that we should always take the time to pause and reflect, looking around us and appreciating every little thing that we see.

You can take our tour with Food + Shodo (calligraphy) but if you are interested in only the food and red pants (lol) — Check out our Super Sugamo Foodie Adventure tour! 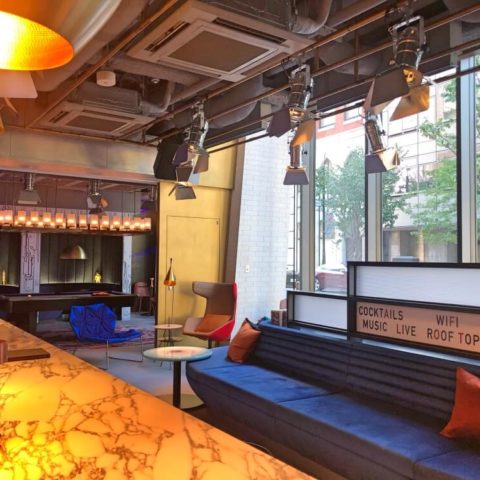 Aloft Tokyo Ginza, a Great Hotel for your stay in Japan 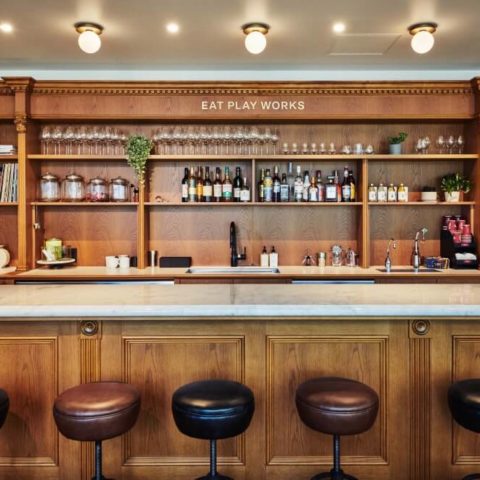 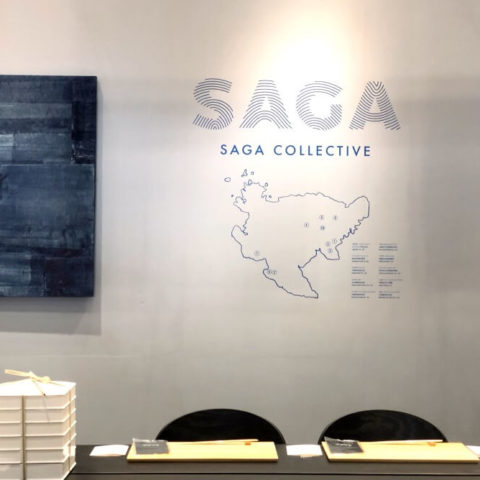