Happy Halloween Treats in Japan 2021: Round Up 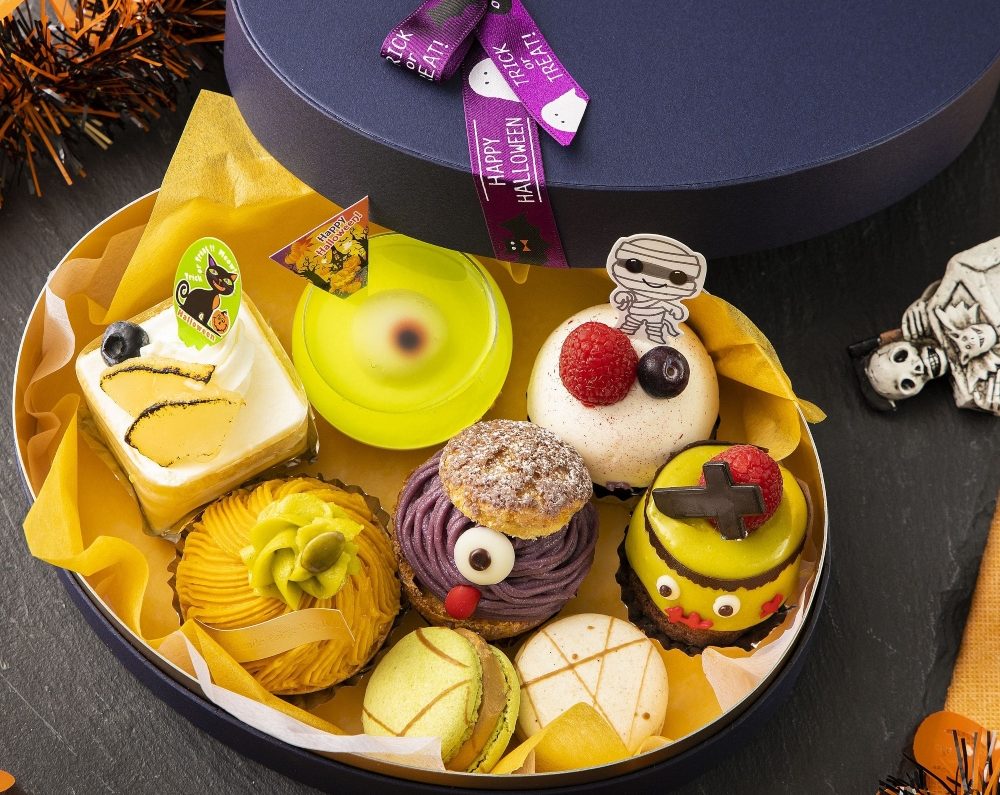 Now that it’s October, the Halloween season has just begun. Though Japan was a late-comer to celebrating this holiday, these days it is a BIG deal, with so many special foods, events, haunted house experiences and parties!  If you are in Japan during this spooky season, we recommend that you celebrate the holiday with some delicious Halloween-themed treats.

Many shops and companies have released their Halloween lineup of scary and cute (mostly the latter) food. We created a round up of the best Halloween-themed treats that you can try in Japan this year to get into the Halloween spirit! We know many people can’t join us this year– but this is also good for some travel daydreams about an autumn adventure next year! Especially since each year the offerings get better and better! BOO! 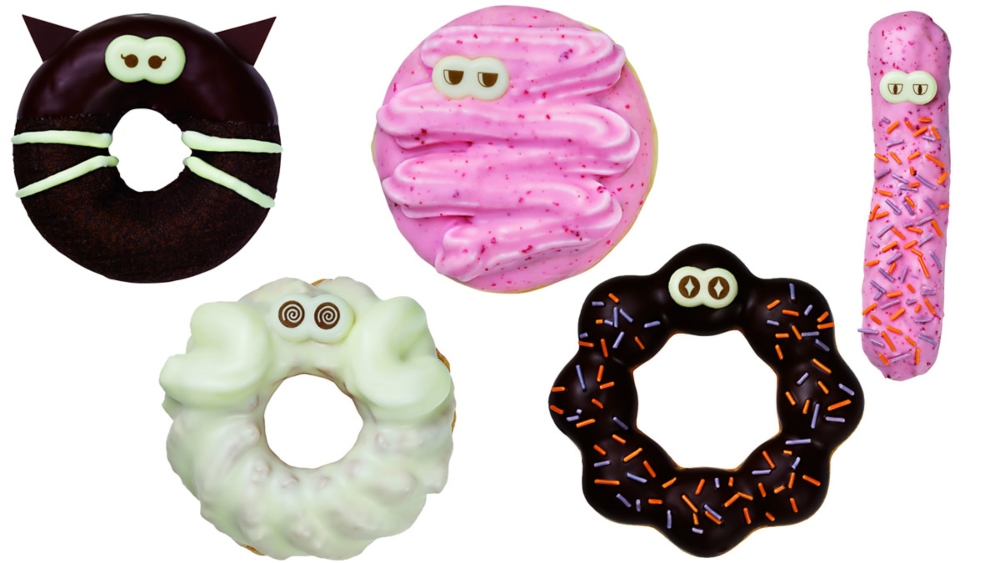 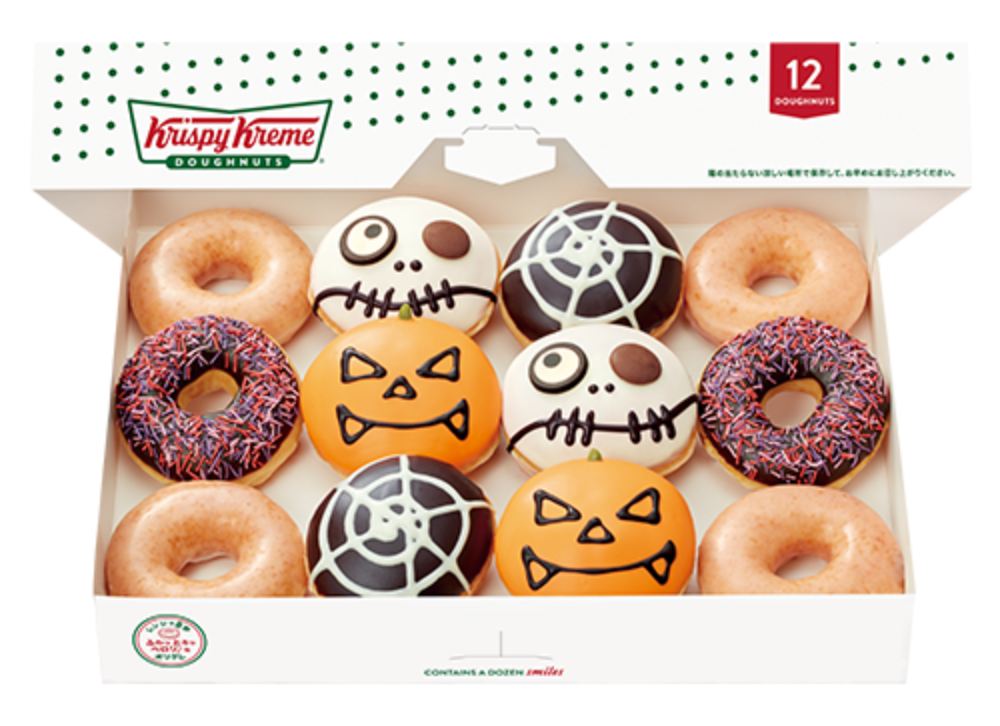 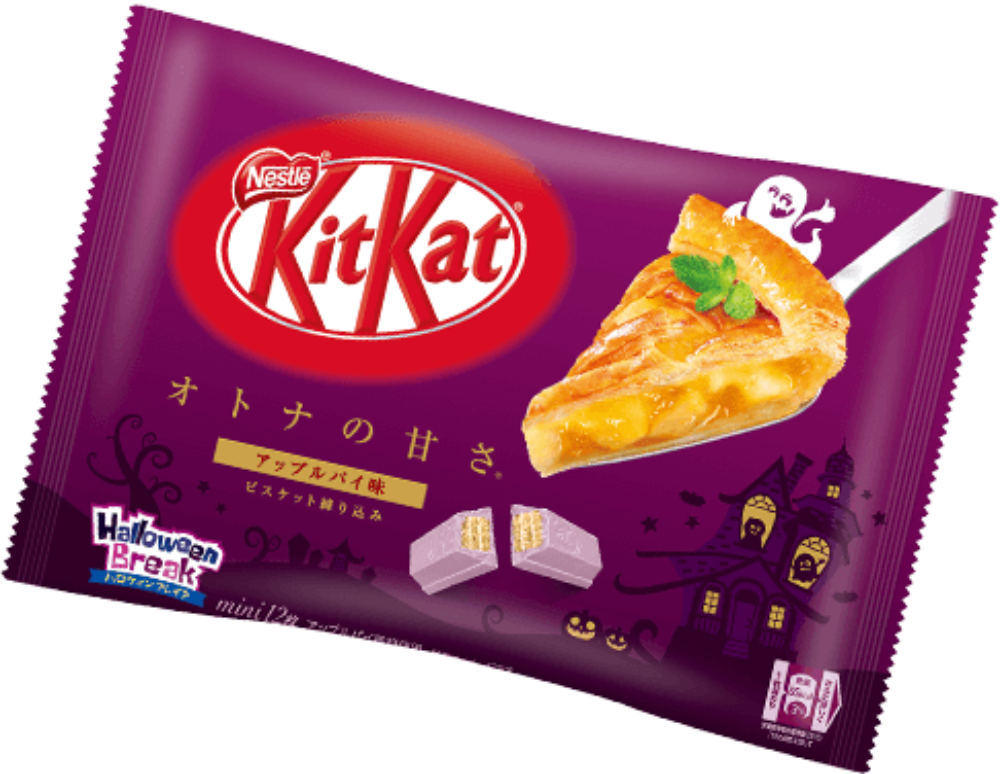 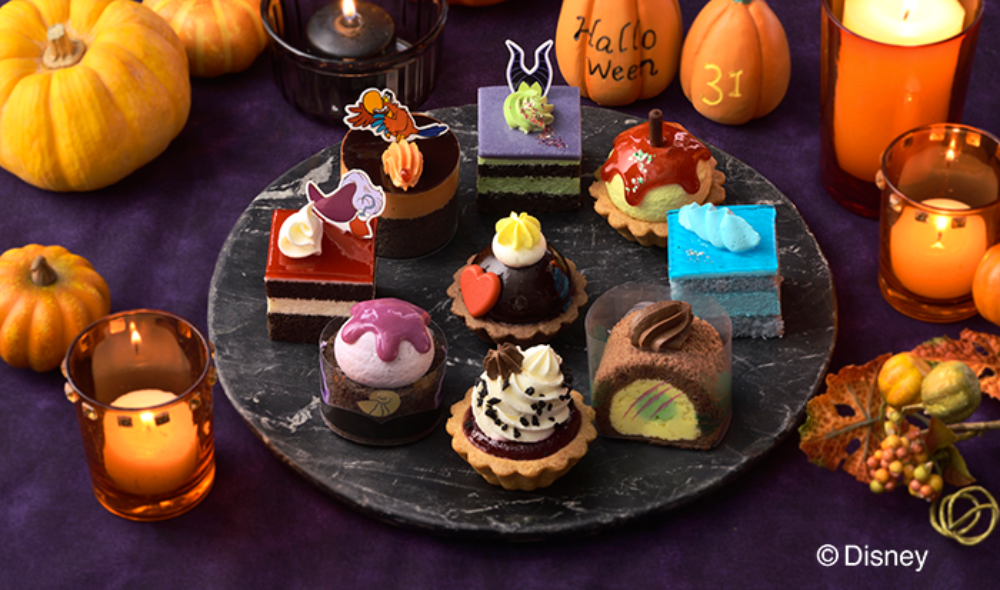 Starting from the purple cake at the top of the circle going in a clockwise direction: 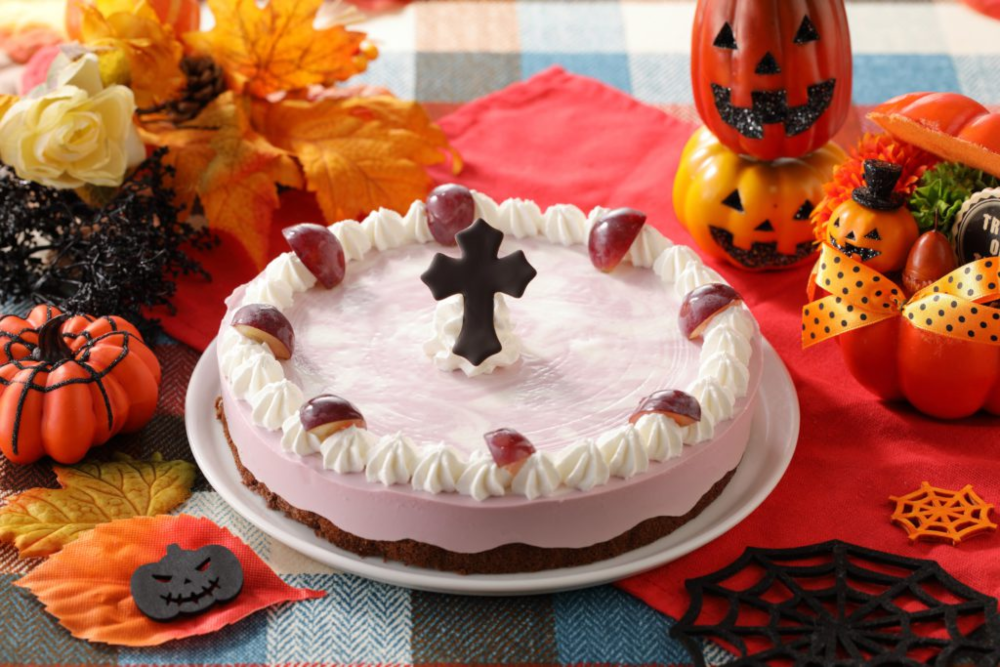 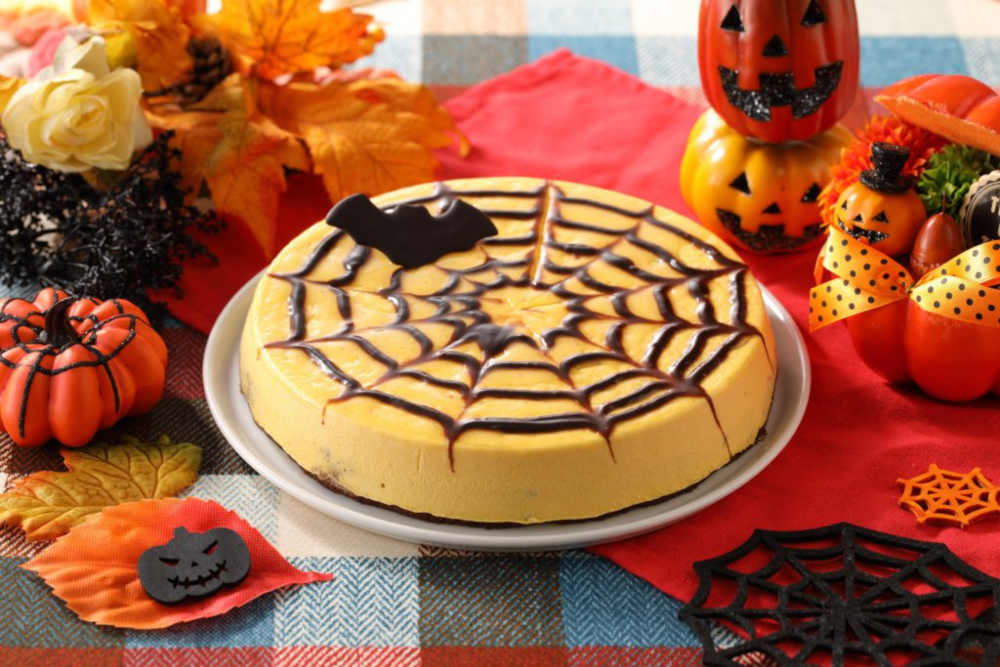 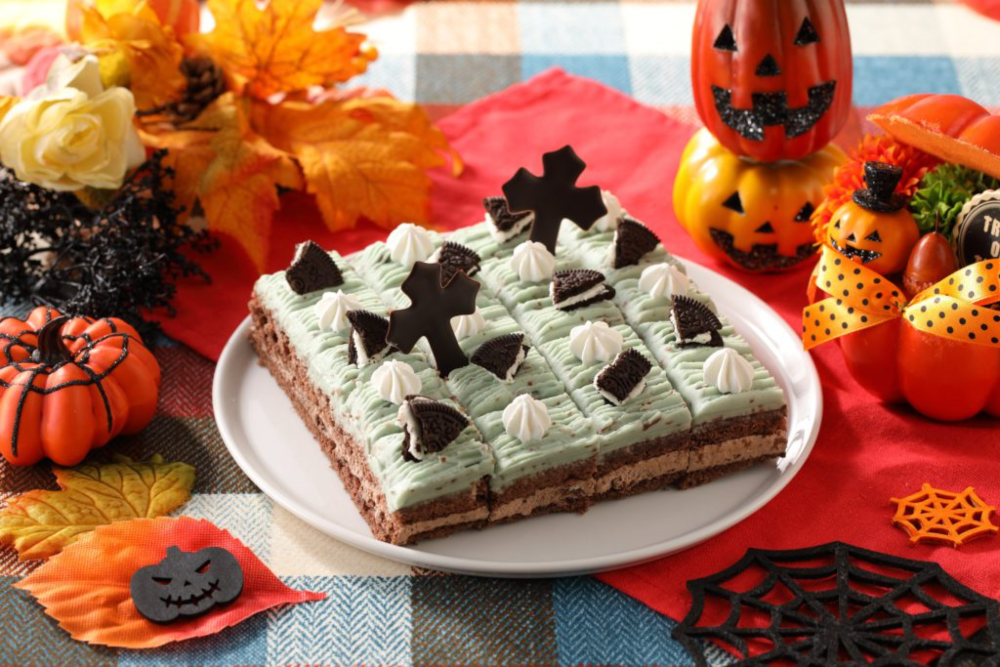 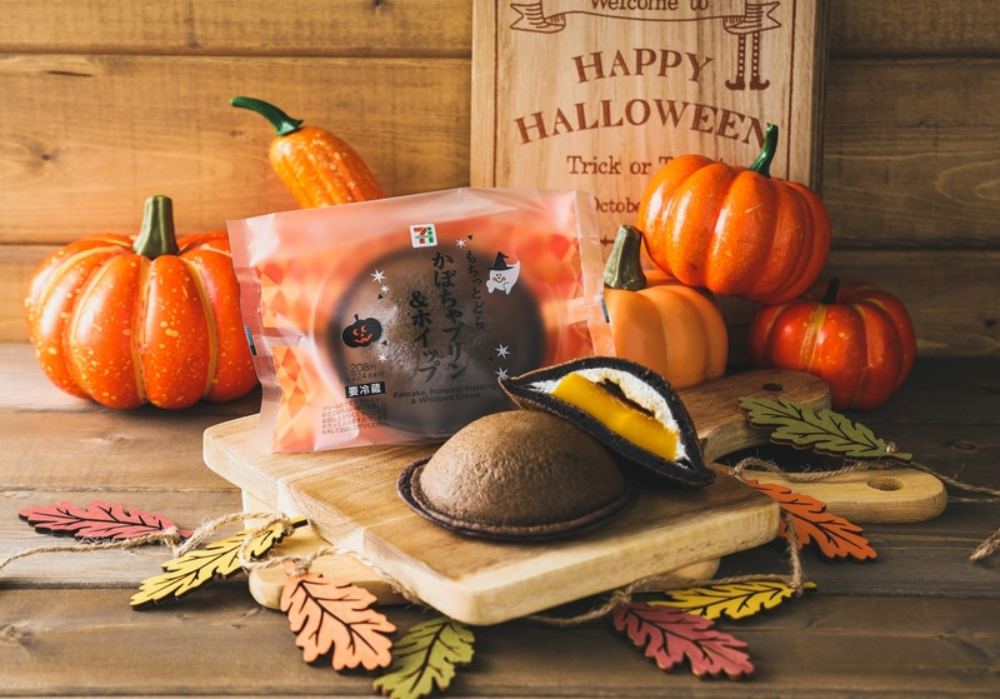 7-Eleven gives dorayaki, a classic Japanese sweet, a Halloween twist. Rather than the typical filling of azuki (red bean) paste, this dorayaki is filled with a sweet and smooth pumpkin pudding cream. 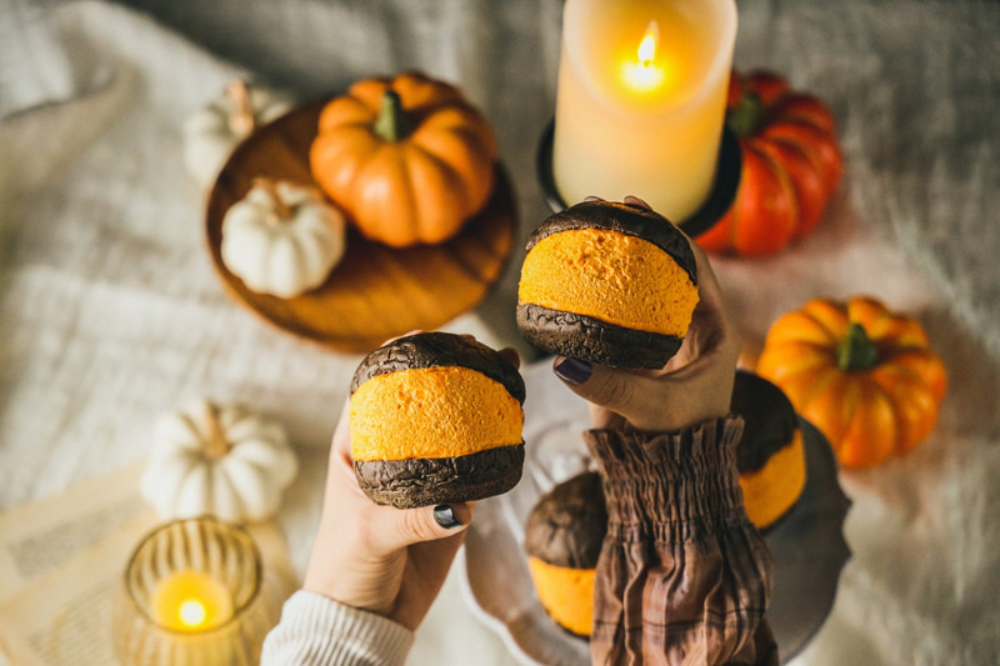 Maritozzo is an Italian sweet pastry that is currently very popular in Japan. 7-Eleven’s maritozzo is made with delicious pumpkin cream and a soft chocolate bun to create the Halloween-esque orange and black colouring. 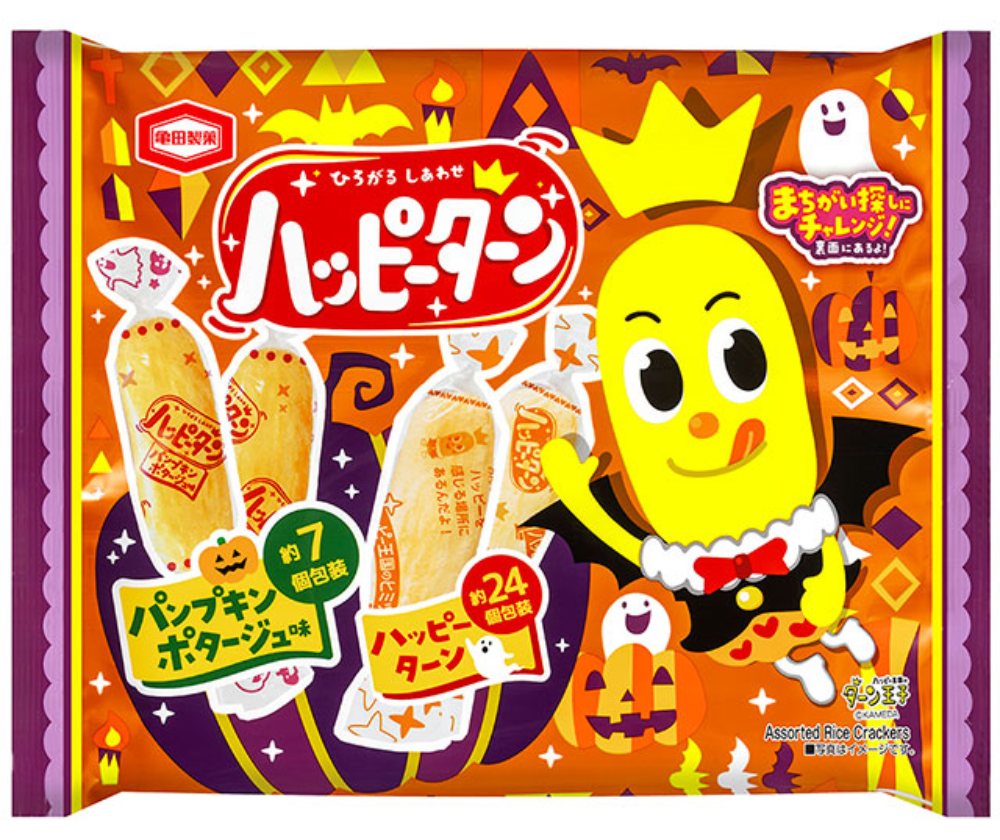 Happy Turn rice crackers have been popular in Japan since the mid-1970s. Their new Halloween flavour imitates the heartiness of pumpkin potage. 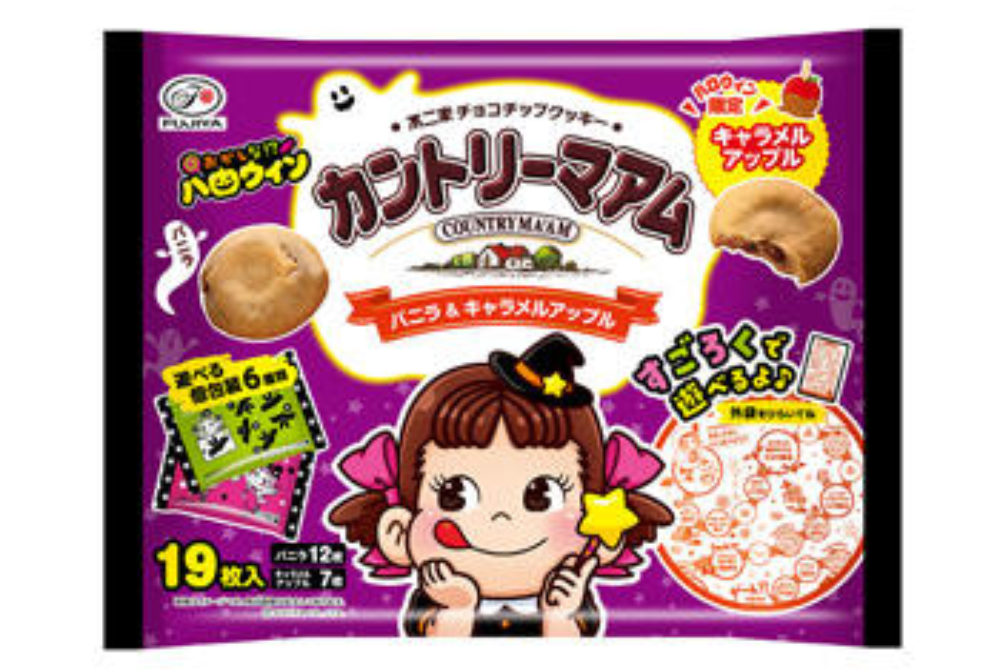 These caramel apple soft cookies can be microwaved for a few seconds for a warm, sweet, and delicious Halloween snack. 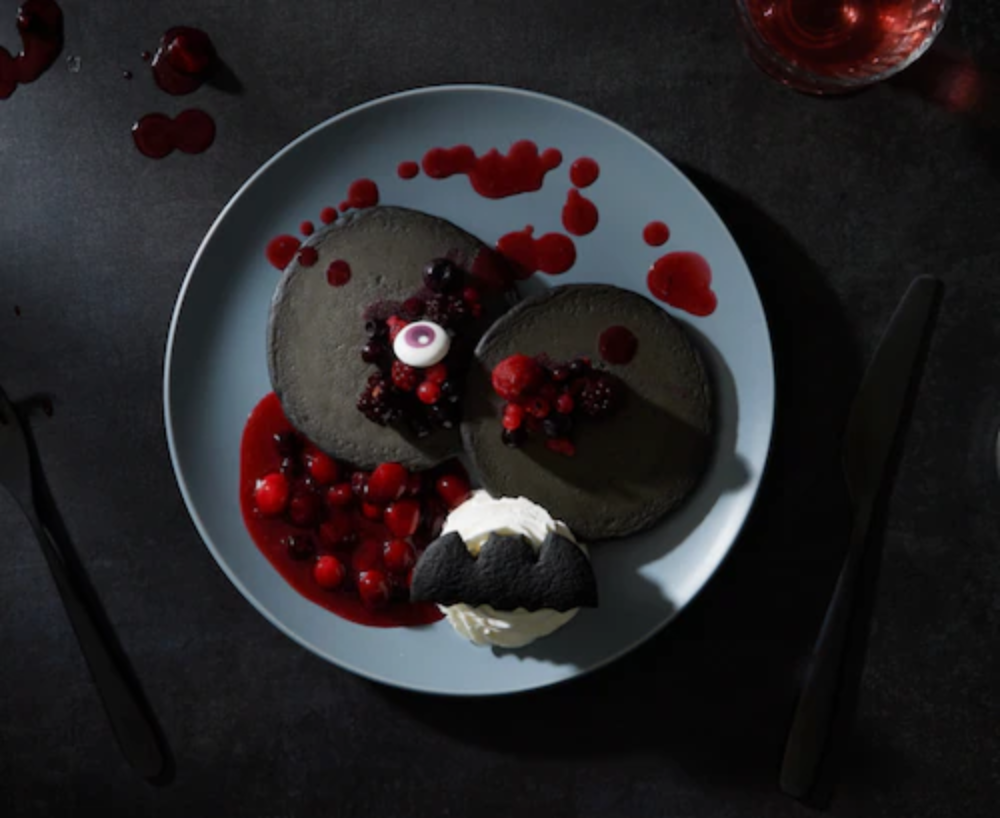 Bamboo charcoal gives these pancakes a Halloween-esque dark colour. It is served alongside berries, whipped cream, a bat-shaped cookie, and a meringue eye. 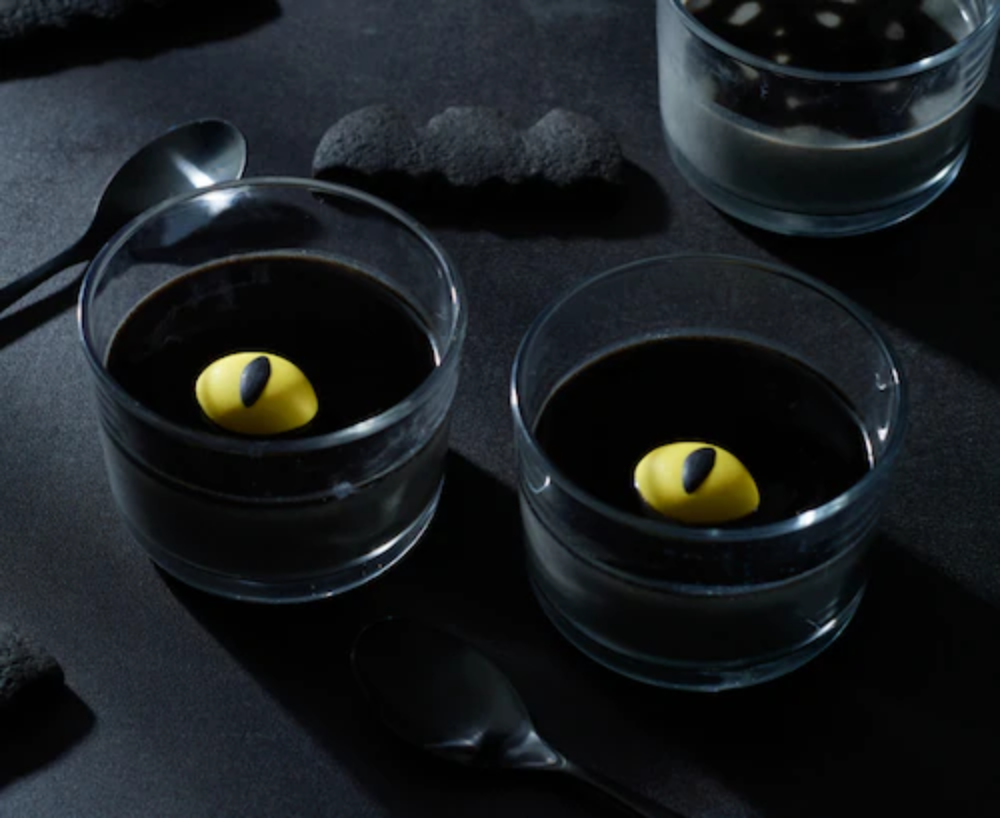 This pudding is topped with a bright yellow cat eye. 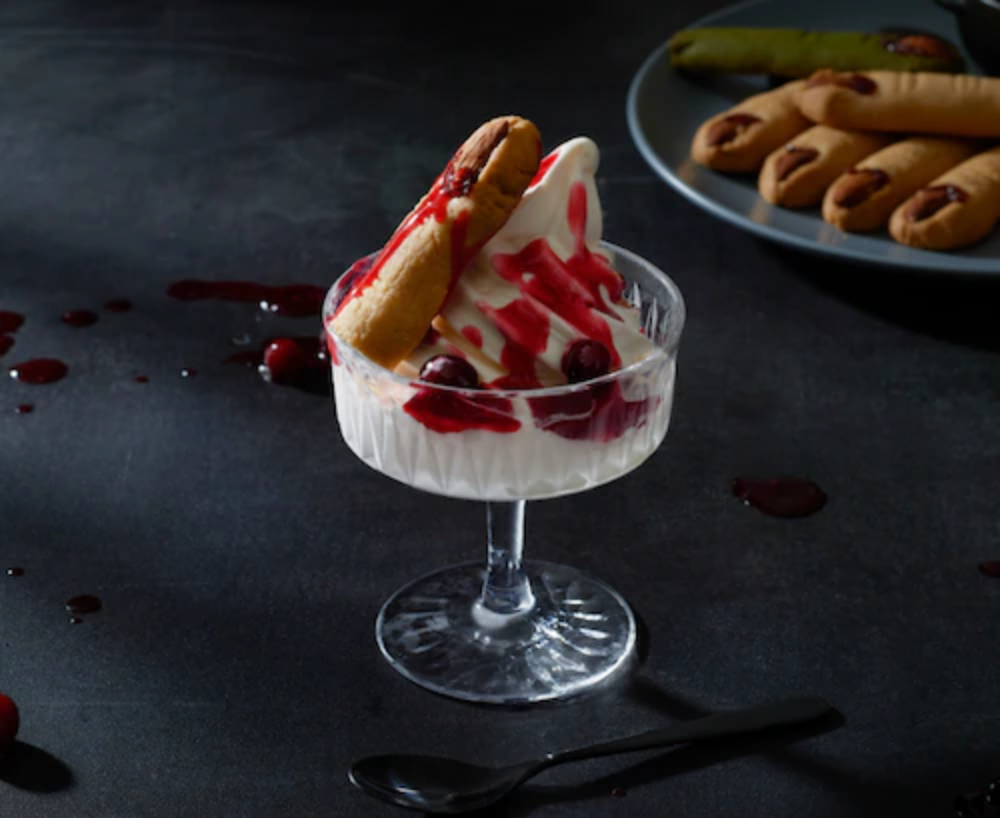 This ‘grotesque’ sundae consists of a vanilla soft serve topped with a finger-shaped biscuit with an almond nail that is covered with berry sauce ‘blood’. 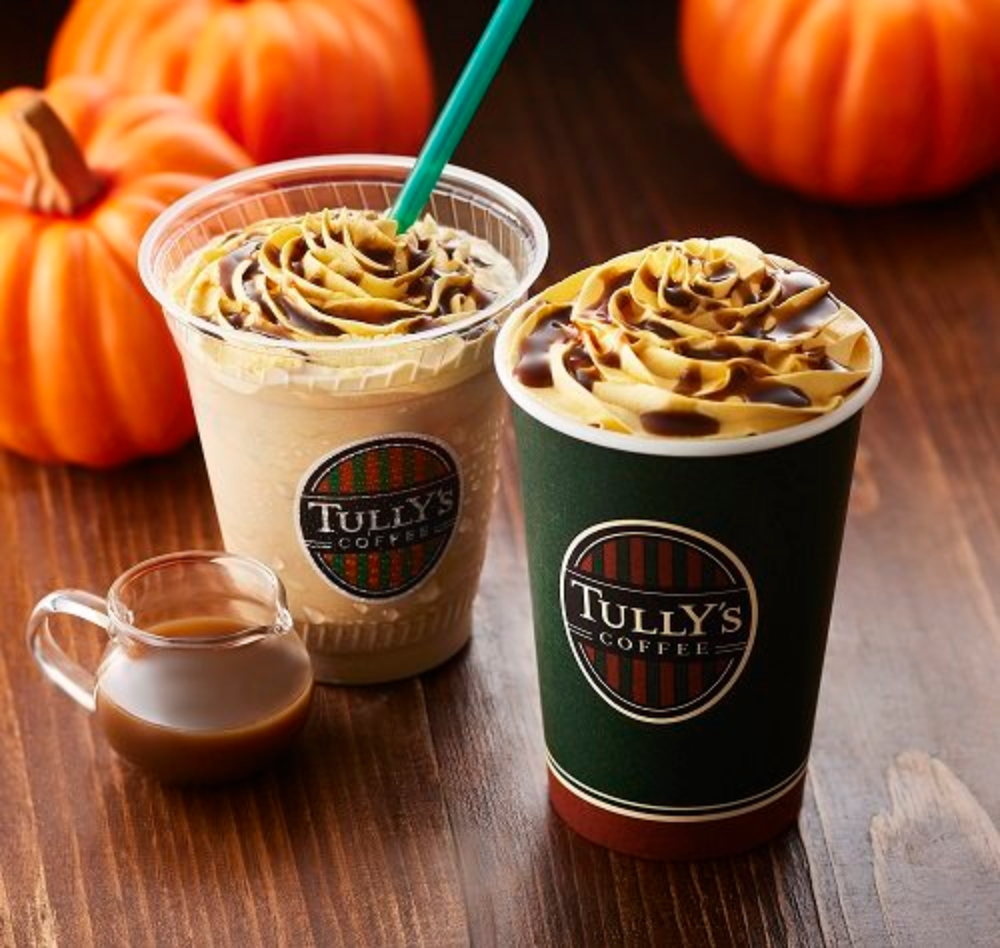 Tully’s Coffee’s Halloween drink tastes just like pumpkin pudding. The pumpkin latte has a drizzle of bittersweet caramel and is topped with pumpkin whipped cream. 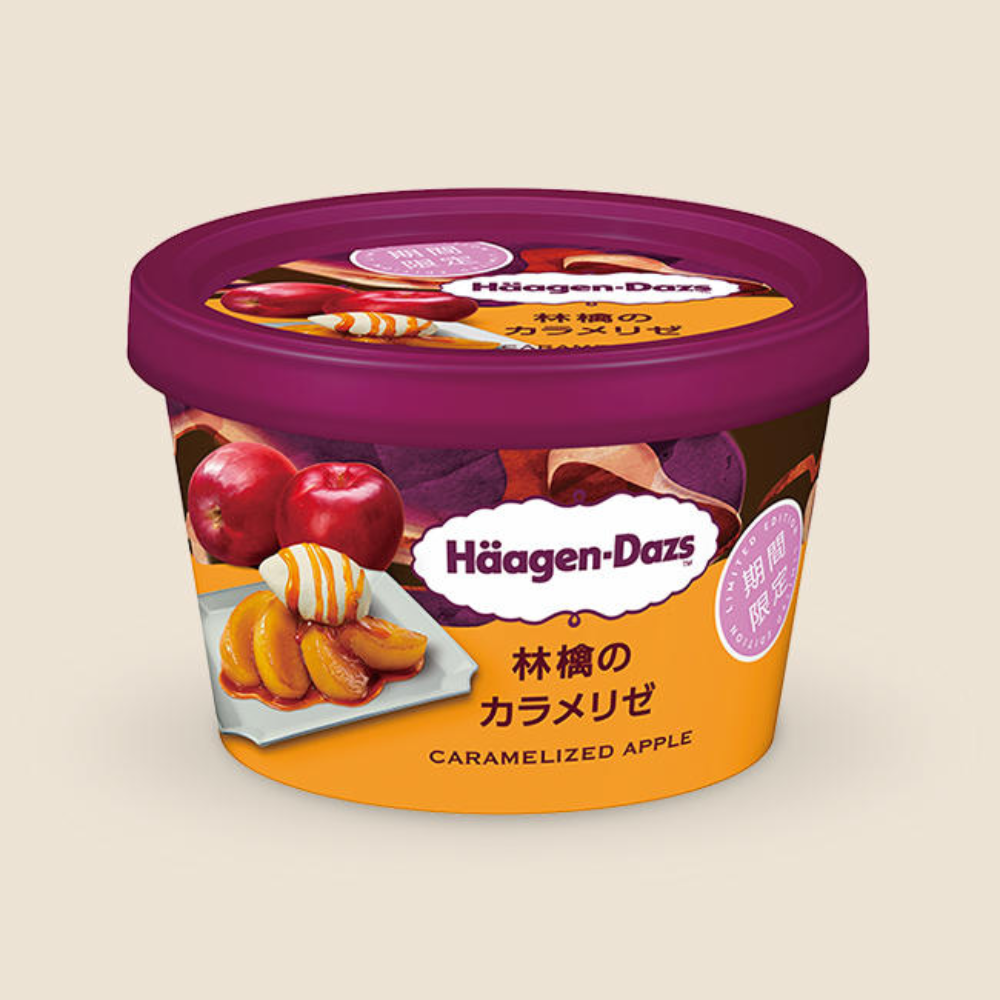 Haagen-Dazs’ Halloween icecream is a delicious creamy caramel flavour with pieces of caramelized apple. The sweetness of the caramel and the tartness of the apples creates a perfect harmony. 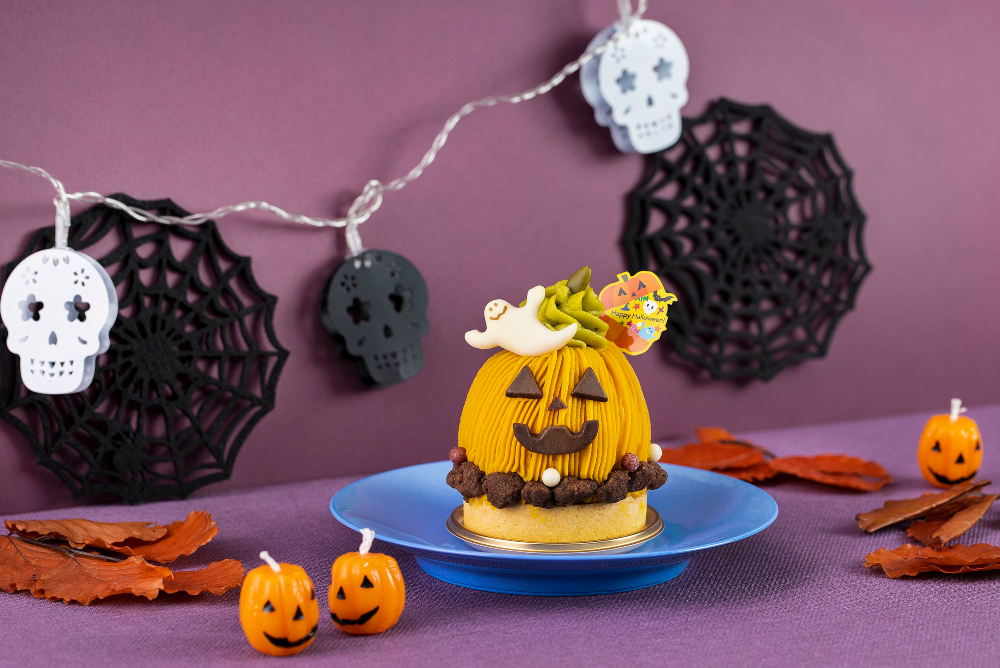 This Jack O’Lantern tart is filled with cream and pumpkin brulee, covered with pumpkin mousse, and topped with pistachio cream and a chocolate ghost. 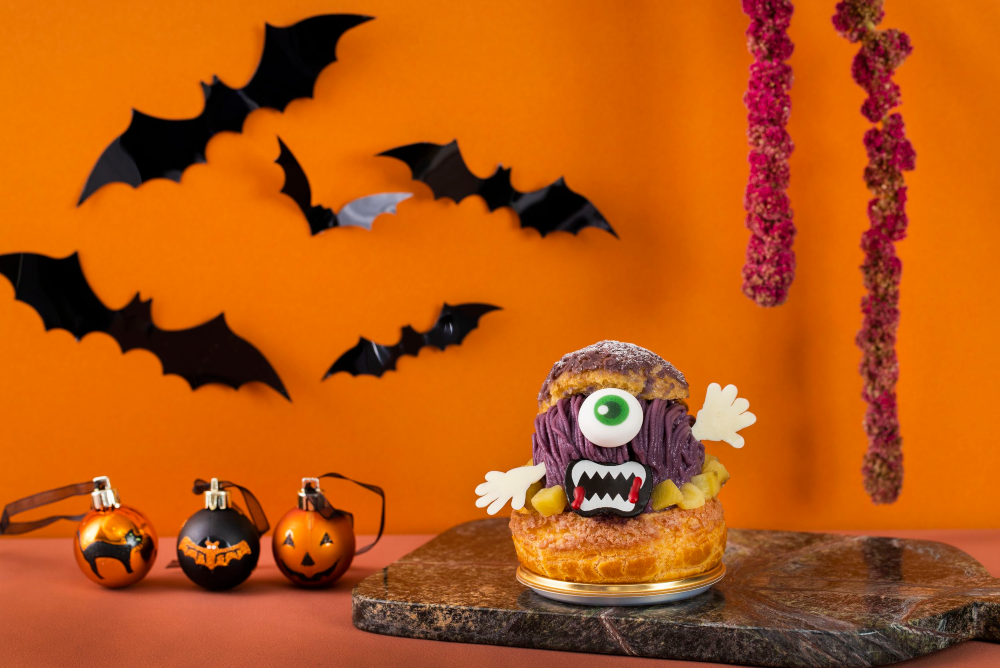 The puff pastry at the bottom is filled with custard cream and apple compote, and topped with sweet potato and vanilla mousse. The monster’s cute face is made with murasaki-imo cream. 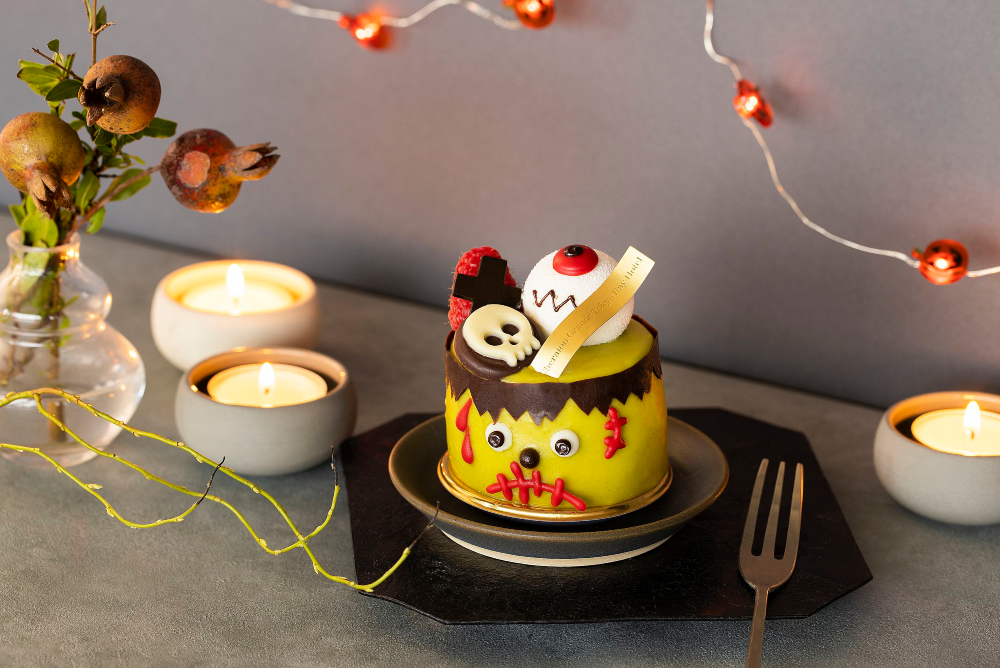 This pistachio mousse is filled with layers of chocolate brulee and griotte cherry jelly. 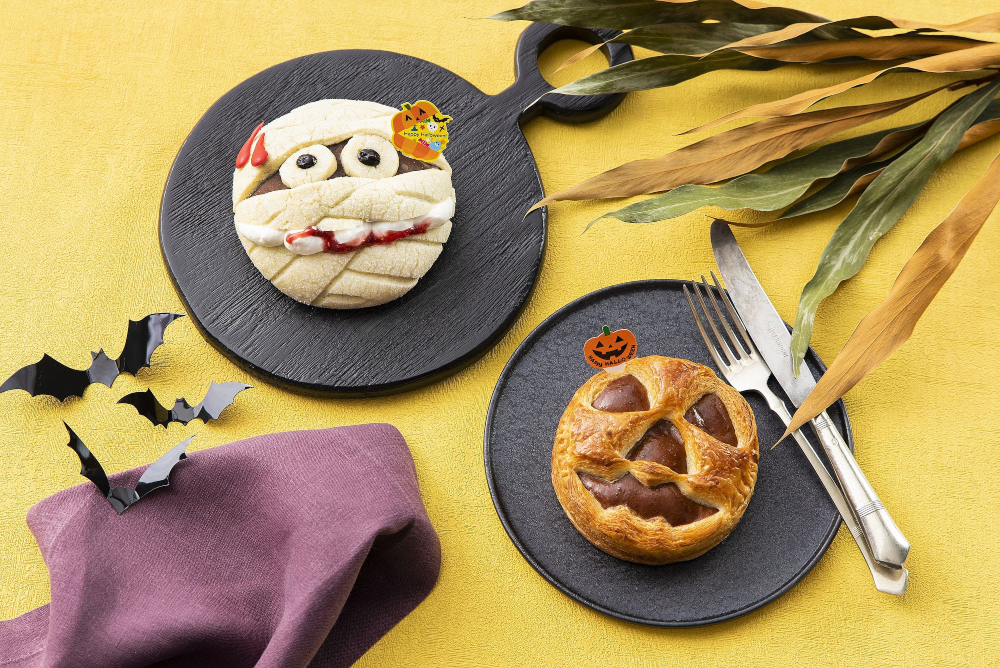 The mummy bread is made with a cocoa flavoured dough that is filled with chocolate custard, fresh cream, and raspberry jam, and covered with cookie dough.

There is an amazing range of Halloween-themed foods that can be found in Japan. If you’re in Japan this October, make sure to try some of these spooky Halloween treats to fully enjoy this delicious season.

Getting Hungry? You can also head over to this post about the top 5 delicious foods to try during the Autumn season in Japan! 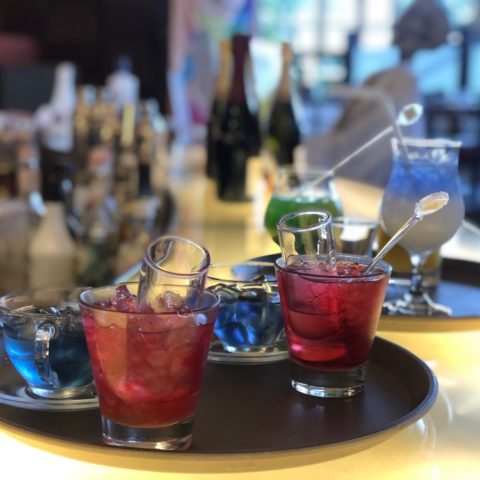 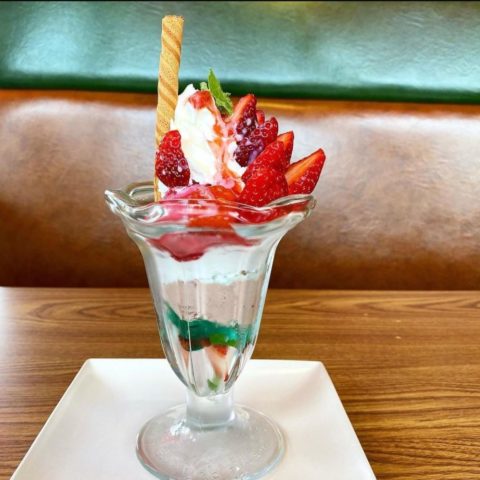 Japanese Parfait: How to cool down in the summer heat! 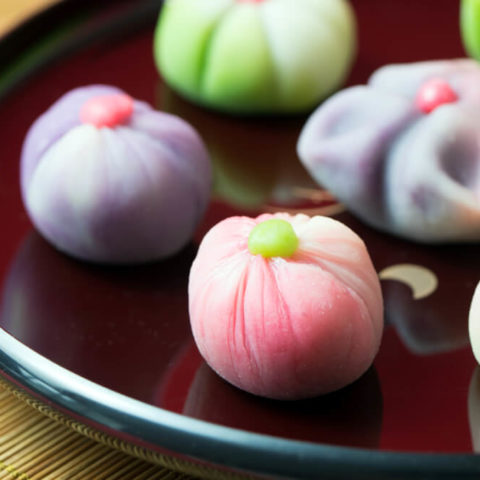